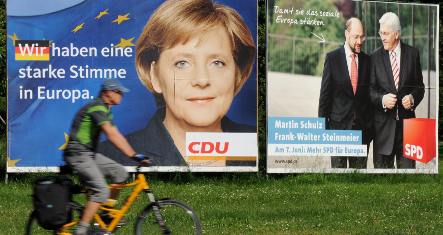 With polls indicating a record low turnout for the EU election, which will be held in Germany on Sunday, Merkel joined French President Nicolas Sarkozy this week in making a plea to voters to make an effort for Europe.

Some 62 million German voters are eligible to pick 99 of the 736 Euro deputies. Some 20 million of them in seven of Germany’s 16 states can also vote in municipal elections.

But according to the latest poll by the ZDF television channel, held on May 29, only 32 percent of the electorate is sure to vote. In the 2004 EU election, turnout was 43 percent.

The European vote has become intertwined with national politics with all parties now worrying about the parliamentary elections in September.

“European elections have always been a test of domestic politics but never to this degree,” said Jan Techau from the German Council on Foreign Relations (DGAP). “They have never been so clearly an indicator for the legislative elections,” he told AFP.

Germany’s recession, which has brought a major rise in unemployment and the national debt, is expected to figure highly in campaigning for general elections on September 27 when Merkel is standing for a second term.

Convincing voters that she and her conservative bloc can get Germany on the road to recovery is a tall order – as it is for the other parties.

According to surveys, if the vote was held now Merkel’s Christian Democrats (CDU) and their Christian Social Union (CSU) allies would garner about 39 percent of the vote in September: a more than 10 percentage point lead over the Social Democrats (SPD) and their candidate for chancellor, Foreign Minister Frank-Walter Steinmeier.

The Christian Democrats got a record 44.5 percent of the vote in 2004.

About 60 percent of those interviewed in one opinion poll said they viewed the EU election on Sunday as a key indicator for national parties. Only 35 percent saw it as a test for European politics.

Tauch said the themes for both the Euro and the parliamentary elections were the same.

“The main issue is the universal theme – the global financial crisis,” he said.

Posters for the European vote hardly have a continental theme.

The radical Left party has focussed on a quick exit from Afghanistan, where Germany has some 3,800 soldiers under NATO command, even though the EU parliament has no say on foreign policy.

The centre-left SPD talks about Europe but concentrates on attacking its domestic opponents such as the liberal Free Democrats (FDP). “The finance sharks would vote for the FDP” says the SPD slogan.

Merkel’s Christian Democrats have focused on protecting German interests in the Europe – a point regularly stressed by the chancellor on the campaign trail.

Merkel said in a recent speech at Humboldt University that she wanted to “dispel false images that Germany was the main financier of the EU.”

She also stressed that Berlin was not pouring huge sums in the former East Germany – a major complaint of many Germans who say their money is being spent in subsidising the former Communist state.

Merkel also rubbed home the fact that Berlin was protecting its interests in the European arena, saying: “We are not going with our heads bowed down, we will take into account the general good.”

The EU stakes are higher now though as the European Parliament – the only directly elected EU institution – would get a bigger voice in decisions that affect 500 million Europeans if the Lisbon reform treaty comes into force.