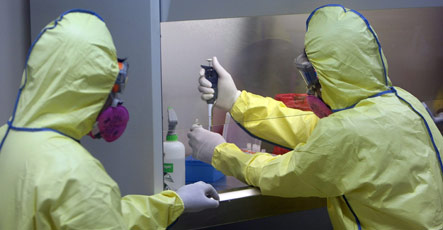 New cases cropped up in the states of Thuringia, Lower Saxony and Saxony for the first time, while there were also new cases in North Rhine-Westphalia, Hesse and Saxony-Anhalt, the institute said.

All of the new infections stem from Germans who recently travelled to the United States, where the A/H1N1virus has spread more quickly than the rest of the world with 8,000 cases.

Among the ill is a four-year-old boy from Schortens who has been quarantined in his home in Lower Saxony after returning from America and being briefly hospitalised, broadcaster NDR reported.

Citizens should not panic, Lower Saxony state Health Minister Mechthild Ross-Luttmann told the broadcaster, adding that the most important thing is for cases to be identified early.

The first swine flu patient in Thuringia this weekend was a mildly infected man in Weimar, meanwhile another infected American businessman has been isolated in a Leipzig hospital.

A 43-year-old in the Salzland region of Saxony-Anhalt has also been confined to his home as a safety precaution.

With nine cases, the state of North Rhine-Westphalia has been most-affected by the virus so far. This weekend a 23-year-old student from Essen and two other men were found to have the virus after travel in the US.

Three new Hesse cases are all in recovery, authorities reported. One 24-year-old English student from Kassel was confirmed to have the virus on Sunday, and another 47-year-old apparently infected one of his two daughters. The two men were on the same flight from New York to Frankfurt last Monday.

The World Health Organisation reported some 15,500 swine flu cases in 53 countries on Friday. Ninety-nine people have died of the illness. The first infection cropped up in Mexico in mid-March and the first German cases were confirmed on April 29.