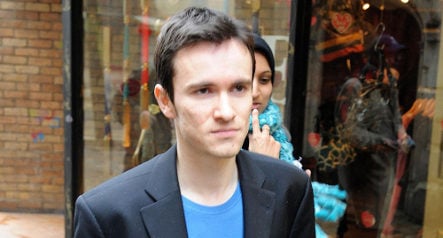 Martin Jahnke, 27, a pathology postgraduate, is charged with pitching a sneaker at Wen as he spoke at the university on February 2.

Prosecutors say he behaved in a way “likely to cause harassment, alarm or distress” but Jahnke denied a public order offence at a previous hearing.

The trial at Cambridge Magistrates Court in eastern England is expected to last for three days.

Wen was giving the lecture the last day of a European tour when he was interrupted by a protester shouting “this is a scandal” and branding him a dictator.

The protester threw a sports shoe, which hit the stage close to the Chinese leader, and was then escorted out of the auditorium.

Wen described the action as “despicable” before resuming his speech. But he has since urged that the student be allowed to continue his studies at Cambridge, one of the English-speaking world’s most prestigious universities.

The Chinese premier has insisted that the incident would not harm relations with Britain.

The alleged offence is contrary to section four of the Public Order Act 1986 and if found guilty, Jahnke could face six months in prison and a 5,000-pound ($7,400 dollar) fine as a maximum sentence.

Jahnke could face disciplinary action by the authorities at the university, where he reportedly carries out important genetic research into debilitating diseases such as diabetes, multiple sclerosis and arthritis.

The university said a complaint had been made and it was being looked into.

University Vice-Chancellor Professor Alison Richard said at the time that she “deeply regret(s)” the protest. “This university is a place for considered argument and debate, not forshoe-throwing,” she added.

China’s ambassador to Britain, Fu Ying, was quoted on the Chinese foreign ministry website as saying in February: “It is hoped that the university will give the student an opportunity to continue his studies…

“As a Chinese saying goes, it is more precious than gold for a young person to turn himself around to redress mistakes,” Fu said.