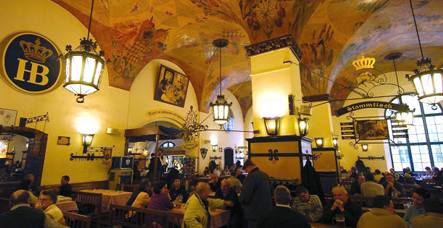 A contract should be signed by summer, after which the Munich brewery will build out a miniature version of the famous beer hall in New York, with space for 150 to 200 guests, brewery director Michael Möller told news agency DDP.

“Once the negotiations are completed, we’ll need about six to nine months until opening,” Möller said.

The Manhattan Hofbräuhaus isn’t the first to reach American shores, there are also branches in Las Vegas and Pittsburgh, as well as six other beer halls in the US, Dubai, China and elsewhere.

Möller said he had hoped to open a larger beer hall in New York with place for up to 500 drinkers, but high real estate prices in the city would make the project too expensive.

The Munich Hofbräuhaus, which is opened by the State of Bavaria, was the original home of the Hofbräu brewery when it was founded in 1589. The name Hofbräu means “Court Brew” in German, reflecting the brewery’s role of supplying the Bavarian royal family with beer.

While the Hofbräuhaus is perhaps best-known today as an international tourist trap, it also played a key role in the rise of the Third Reich. Adolf Hitler launched his so-called Beer Hall Putsch from the Hofbräuhaus in 1923. The coup attempt failed and landed Hitler in prison, where he wrote Mein Kampf.