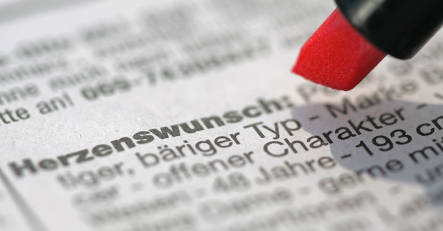 The 56-year-old had escaped from prison three times and had a €100,000 reward on his head for multiple run-ins with the law, including the kidnapping of the wife of a top banker in Wiesbaden in March. Wolf received €1.8 million as ransom for her release.

But Wolf’s lonely heart led to his downfall, Bild reported.

Police were tipped-off to Wolf by the woman who had responded to his May 16th personal ad in the “Seeking Marriage” section of the daily Hamburger Abendblatt, which had advertised Wolf as “cultivated but seldom boring” and “financially independent.”

The woman, known only as Eva S., met Wolf twice for dinner, where he told her he had “skeletons in the closet” and could appear in public. Wolf then told her had a fortune in cash and asked for her help. Would she rent an apartment, register a car and open a bank account, all under her name? In return, Wolf offered Eva S. €100,000.

Wolf didn’t mention his past as a kidnapper or bank robber, but implied that he had embezzled the money from a car dealer. Eva S. expressed surprise and said she needed time to think about his offer.

On the cab ride home, Wolf gave her his mobile phone number. A few days later, he called Eva S. and said he was being kicked out his hotel and asked to spend the night with her. She declined, but offered to put him up with friends of hers. Wolf didn’t take the offer and an uncertain Eva S. asked friends for advice. One of them found Wolf’s wanted picture online and when Eva S. saw the photo, she turned to the police.

Police were able to track Wolf’s approximate whereabouts using his mobile phone and on Thursday, an investigator recognised Wolf and arrested him. Agents found €140,000 cash in his hotel room. Wolf currently awaits hearings in a Hamburg prison cell. Eva S. left the city on Friday and is now at undisclosed location, Bild reported.