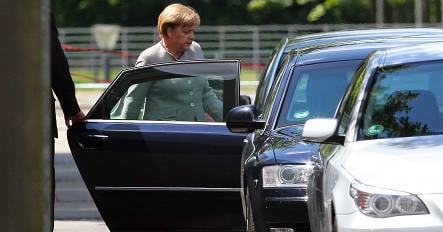 And while Germany’s 25,000 Opel workers cheered the deal, Merkel – who faces a general election in four months – said she was under no illusions as to the scale of the challenge facing the reborn company and its employees.

“For Opel and Magna, the work is now just beginning and there are several difficulties still to overcome,” she told reporters on Saturday. Government sources said that Magna was likely to slash around 2,500 jobs at its four plants around Germany, but stressed that all four factories would remain open, a pledge repeated by Magna bosses after the talks.

“I am very happy that we have managed to save Opel and that the company will not be dragged down by the insolvency of GM,” Franz told AFP. “But difficult times are still ahead of us … Germany is not a land of milk of honey, that means there will be job losses.”

“The most important thing is that the social dimension is being taken into account and that there will be no factory closures,” he added.

Analysts also warned against euphoria in the immediate wake of the deal, given the still parlous state of the global car industry. “All this seems to rest on a very fragile base. Let’s say there is a 60 or 70 percent chance that it won’t work,” said Jürgen Pieper, an automotive expert at Metzler bank.

Frank Schwope, from NordLB bank said that the Canadian-Russian investors “will try everything, and then fail and Opel will be insolvent in two or three years.”

Schwope also doubted if Magna, a rags to riches car parts maker with little experience of manufacturing cars, was the right fit for Opel.

“They are going to have problems with two million GM Europe cars to produce when it is not their main activity,” he said.

Germany played such a big role as it agreed to stump up billions of euros in loan guarantees and emergency loans to keep the ailing company afloat.

Government sources confirmed on Saturday that Berlin would give loan guarantees of €4.5 billion, including €1.5 billion in short-term loans to tide Opel over. Magna has pledged to cough up €300 million for Opel’s very short-term financing needs.

And what began as a desperate scramble to save an iconic European brand blew up into what Merkel described as a “test for the transatlantic relationship.”

Talks earlier this week between German and US officials broke down in acrimony and recrimination with Germany’s Finance Minister Peer Steinbrück accusing the US side of “scandalous” negotiating tactics.

Berlin was furious at what they saw as a last-minute moving of the goalposts by GM and Washington as they suddenly asked Berlin to provide an extra €300 million “out of the blue.”

But Merkel was at pains to smooth over these difficulties on Saturday and said that a telephone call to President Barack Obama helped seal the deal. Germany and the United States have “passed” the test, she said, while continuing to lash out at what she said was “huge mismanagement” by GM executives.