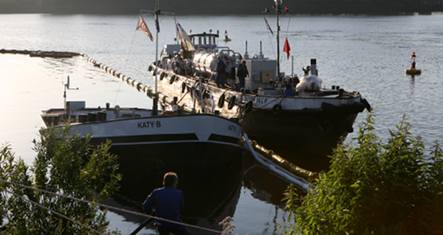 The inland water craft Katy B was carrying more than 1,000 tons of wheat collided with another boat, whose anchor ripped a hole in the front of the Katy B, a police spokesman said. The 53-year-old captain was able to steer the boat towards a nearby quay before it partially sank in shallow water.

The Katy B was carrying over 7,700 liters of diesel fuel as well as 80 liters of lubricant that is leaking into the Elbe river. The size of the spill is not yet known, but environmental protection services are trying to contain it, to prevent wider damage to the Elbe.

Police said a salvage effort is underway. A firm has already been given a contract to retrieve the ship’s wet cargo of wheat.

Named Germany’s “Gateway to the World,” the port of Hamburg is one of the largest ports in Europe. It’s built along the Elbe about 110 kilometers from the North Sea. The port handled over 27 million tons of cargo in the first quarter of 2009.