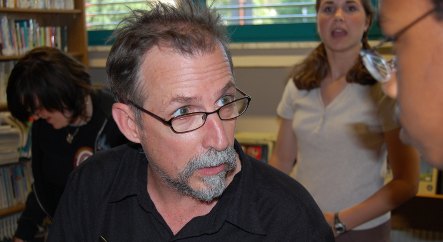 Wallace, who wrote “Big Fish: A Novel of Mythic Proportions,” was the second author to tour in the “Conversations” series of literary discussions sponsored by the US Army Europe libraries.

Wallace followed Andrew Carroll, who spent three weeks with soldiers and family members in September 2008. And in August this year, Gary Shteyngart, the author of “Absurdistan” and “The Russian Debutante’s Handbook,” will tour garrison libraries in Germany.

“The idea of the programme is to bring over published writers from a variety of different fields, not just fiction, and really create an environment where they’re not just talking at our audience, but there’s actually an interaction,” said Christina Kruger, the director of acquisitions and programming for Army Europe Libraries. “We want our patrons to be able to ask questions and learn from the interaction.”

The popular writers series is supported by US Army Europe funds with a 2009 budget allotment of $20,000 per author, said Kruger.

US Army First Lieutenant Michael G. Cummings with the 503rd Infantry (Airborne) Division in Vicenza, Italy said he was drawn to the Daniel Wallace event because he blogs frequently on the subject of violence and art following his tour of duty in Afghanistan.

“From the beginning of art to the present, from the first oral traditions to the modern Hollywood blockbuster, almost all art, especially great art, concerns violence,” Cummings explained on his blog. “Writing helps ease any problems I have with the military. So, instead of complaining I write it down. I still complain a lot but it helps.”

But during a recent “Conversations” stop at the Patrick Henry Village library in Heidelberg, the only complaining would have come from any English teachers in attendance. Much of Wallace’s advice would have made strict, ruler-wielding grammar mavens squirm. For example, the novelist said he never knows how a story will end until he, too, arrives at the finish line.

“The analogy that expresses it best for me is: Writing is like driving a car at night with the lights on, going down a windy road on which you can only see just so far ahead as the lights illuminate,” Wallace said. “You can only see what is there as you move forward.”

Wallace also said that writers should write what they want to read, not what they think others want to hear.

After a brief introduction, the novelist opened the floor to questions. The audience of 50 members of the US military and their dependents eagerly asked about the writing life and why Wallace became a writer.

Wallace said he was struck by the power of the written word after his eleventh-grade teacher read aloud a story because she had forgotten her assignment for the day. She read J.D. Salinger’s “A Perfect Day for Bananafish.” His response was to laugh and then turn sad. “I thought it would be cool to be able to make people laugh and cry,” said Wallace, who wrote five novels before one was published. His book “Big Fish” was a best-seller and the basis of a film by director Tim Burton.

In an interview before Wallace’s talk, the author said he encourages soldiers to use writing to better understand their own experiences.

“Writing can be therapeutic. Absolutely. Why? Because it gets voices out of your head,” he said.

Wearing a blue Evel Knievel T-shirt, Wallace rested his leg on the arm of a chair as he sat back and pondered his craft.

“Writing about tragedy, which is everywhere, is in some ways vulture-istic, taking advantage of someone else’s sorrow… for your own good…In my opinion, it’s actually the opposite that is true,” he said. “Paying attention to something, giving it a home in the world, through your own attention and your words, makes it holier and gives it a life it didn’t have before. It takes a very courageous person to write.”

And at least one visitor in Heidelberg was courageous enough to reveal his true motivations for wanting to write. A boy, who appeared to be around 13 years old, asked: “When you were younger, did you ever use poetry to impress a girl you liked?”

To widespread laughter from soldiers and family members alike, Wallace answered he should keep at it.