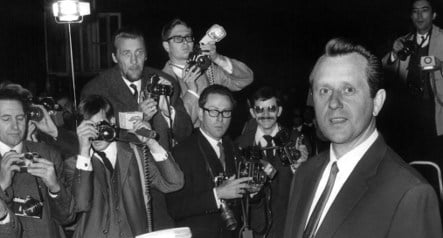 The archive said an external scholar in 2003 was researching the influence of East German state security aparatus on the “domestic policy of the West German and Berlin Senate in the 1950s and 1960s” and through her work she came into contact with Kurras’ files, but not their contents.

The scholar opted to cease her research and the files were apparently returned to their place “unread and unworked.”

This week, Berlin’s Interior Minister Ehrhart Körting opened a probe into Kurras’ Stasi past after new evidence emerged that he had worked as a spy for communist East Germany’s secret police, the Stasi.

On June 1, 1967, Kurras, then a West Berlin police officer, shot dead 26-year-old student Benno Ohnesorg during a violent anti-Iran demonstration in front of the German Opera House in Berlin’s Charlottenburg district. The killing made Ohnesorg a leftist martyr and fuelled explosive student protests against what they saw as a repressive West German state in the following years.

The circumstances of the incident have remained vague through the years. Kurras, now 81 and living in Berlin’s Spandau district, has been twice acquitted of negligent homicide in Ohnesorg’s death, once soon after the shooting in 1967 and again in 1970.

The Office for Stasi Files in Berlin claims that Kurras may have been an agent for the Stasi beginning in the mid-1950s. He allegedly committed to spy on the West German police for the Stasi as an unofficial informant or IM under the pseudonym Otto Bohl. Further documents also show he was a member of the East German communist party.