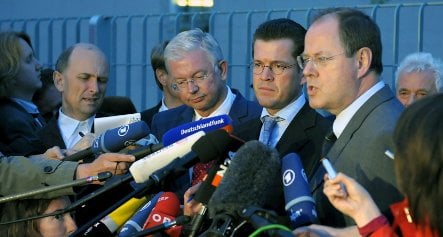 The marathon negotiations were aimed at finding a suitable buyer for GM’s struggling European operations, with the German government willing to offer billions of euros in loan guarantees to any potential investor.

German officials blamed the breakdown on a last-minute request from GM for an extra €300 million ($415 million) in funds for Opel, lashing out at General Motors for “scandalous” negotiating tactics.

Speaking to reporters in the early morning, German Finance Minister Peer Steinbrück said: “We were unpleasantly surprised when this new demand came out of the blue at 8:00 pm local time. We found that pretty scandalous.”

“GM again confronted us with new figures,” Economy Minister Karl-Theodor zu Guttenberg said, adding that the US government “could have made more of an effort” with its choice of representative at the discussions.

“We have made a fresh request to the US Treasury and we expect a response before Friday,” he said, calling its input so far “marginal, to put it politely.”

Steinbrück also said that he did not want German government money to go “outside Europe’s borders.”

A new round of talks is scheduled for Friday as Berlin races against time to find a preferred bidder ahead of GM’s likely bankruptcy on June 1. Declaring Opel insolvent is also still an option.

Officials at Wednesday night’s talks also discussed putting Opel in a trust to keep it operating with a temporary “bridging loan” from the government worth some €1.5 billion.

This model was given a boost on Wednesday by Opel’s announcement that GM had transferred control of GM’s European factories and its patents to the German subsidiary, allowing the firm still to operate in the event of a bankruptcy of the US giant.

“If GM goes bankrupt, we don’t want the lights going out at Opel,” Vice-Chancellor Frank-Walter Steinmeier, who is challenging Angela Merkel for the chancellorship in September elections, told reporters late on Wednesday.

Merkel is under pressure from all sides to find a way to break the deadlock, with some 25,000 German jobs at stake just four months before the country goes to the polls.

Berlin also came under fire from other European countries on Wednesday with Britain and Belgium pressing Germany not to strike a deal that would protect German workers at the expense of employees elsewhere.

The European Commission in Brussels called for a meeting of European finance and industry ministers on the issue “as soon as possible.”

Of the two bidders left standing, Magna’s offer is still seen as the front runner, with unions and centre-left Social Democrat members of the governing coalition backing it.

It has teamed up with Russia’s top bank, state-controlled Sberbank, for a bid that would see precious metals tycoon Oleg Deripaska’s truck company GAZ making Opel vehicles in Russia.

For its part, Fiat wants to combine General Motors’ European and Latin American operations with Chrysler, in which it has secured a 20-percent stake, to create the world’s second largest automaker after Toyota of Japan.

Although the final decision on the fate of GM’s European operations lies with the company itself and the US government, Germany has a key role to play as it is stumping up a good deal of the cash to keep the factories going.

An eleventh-hour “expression of interest” by a Chinese firm, Beijing Automotive Industry Holding, was still under consideration, but German officials made clear their focus was on Magna and Fiat.