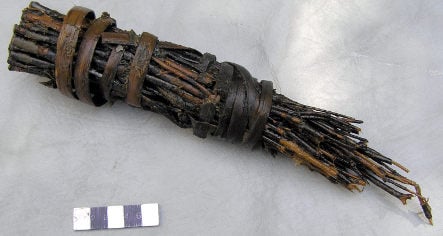 Archaeologists from the Westphalia-Lippe regional authority had just finished excavating an area under the St. Ulrich Church monastery for a new underground parking facility, when one of the construction workers detected a pungent smell.

The men had unearthed the contents of a latrine dating from the 1700s, but the church building itself dates back to before 1200.

“The contents were preserved because the area was air-tight,” Spiong said.

While searching through the moist organic material, the excavation team found several ordinary objects that wouldn’t normally survive for centuries.

“It was really exciting,” Spiong, who has been Paderborn’s city archaeologist since 2003, told The Local. “This is the oldest broom ever found in the region. Natural materials like leather and wood usually don’t survive the elements.”

The 25-centimetre twig broom bound with bast fibre, along with several other objects like a spindle, a wooden bobbin, hazelnut shells and cherry pits will be sent to the regional conservation centre in Münster on Thursday.

Spiong said he hopes the objects will go on display at the St. Ulrich Church, or the Gaukirche, but said they may also find a place in the local archaeology museum.

Regional archaeology spokeswoman Stefanie Mosch told The Local that ordinary objects provide a special window into everyday life in the past.

“It’s fascinating to see that they used practically the same brooms we use today,” she said.