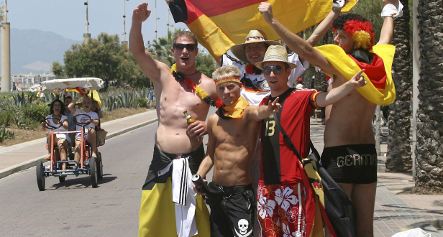 Some 45 percent of those surveyed by Reader’s Digest Deutschland reported having been bothered at least once by their compatriots’ tacky behaviour in foreign lands, the magazine reported ahead of its June edition.

Meanwhile 69 percent of those questioned said they’d been horrified by the condescending tone some Germans take with locals.

Sixty-seven percent said they found public intoxication to be a problem with other Germans, and 64 percent said exaggerated complaints were also mortifying.

These Germans may be spared a bit of discomfort this vacation season, though, because the financial crisis has prompted many to vacation within their own country, German petrol station and rest stop chain Serways said on Wednesday.

In a reader poll conducted for the chain by data-analyst Forsa, Germans said were most likely to visit the states of Bavaria, Mecklenburg-Western Pomerania and Schleswig-Holstein if they vacation at home.

Germans’ least favourite in-country destination is cities, though Berlin was an exception. Young people between the ages of 18 and 29-years-old were most likely to head to vacation there, the poll found.