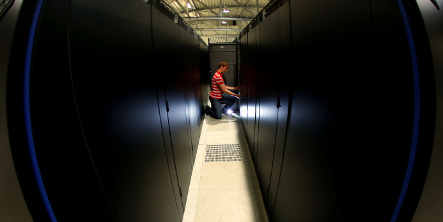 Federal Education and Research Minister Annette Schavan and North Rhine-Westphalia’s premier Jürgen Rüttgers were on hand to launch the JUGENE data processor, which has the computing power of one petaflop, or one trillion mathematical operations per second.

The enormous machine, which consists of 295,000 processors housed in 72 phone booth-sized cabinets, equals the power of more than 50,000 PCs.

Two other supercomputers were also unveiled at the Jülich centre, which collaborates with facilities in Stuttgart and Garching to form the Gauss Centre for Supercomputing.

Researchers in all disciplines will use the supercomputers to calculate data on topics like climate change, cell proteins and semiconductors, the statement said, adding that JUGENE uses the most energy-efficient technology available.

“The supercomputer JUGENE will secure Europe independent access to a decisive key technology of the 21st century,” Chairman of the Board of Directors of Forschungszentrum Jülich and Coordinator of the European Supercomputing Alliance PRACE Dr. Achim Bachem said in a statement.