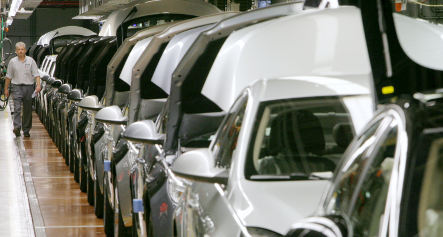 According to a report by daily Bild, Guttenberg said in an internal ministry memo that offers from Italian automaker Fiat, Canadian car parts manufacturer Magna and RHJ International SA were “not economically tenable” and breaking up Opel should be considered.

“From an economic perspective liquidation leads to decreased over-capacity and a corresponding market adjustment,” Guttenberg reportedly said. “Politically, however, liquidation is not possible. Alternatively a controlled insolvency could be attempted.”

But Economy Ministry spokesman Steffen Mortiz said such comments could not be attributed to Guttenberg because “a similar paper came from an external consulting firm.”

Merkel was due to meet Fiat’s Marchionne on Tuesday in Berlin and Der Tagesspiegel daily said that she is planning a summit the next day with the heads of all the firms concerned.

“This week will be a decisive week,” Wilhelm told a regular briefing on Monday, with a range of “intense” discussions planned with all parties concerned including GM, Washington and other European countries.

Fiat wants to combine GM’s European and Latin American operations with Chrysler, in which it has secured a 20 percent stake, to create the world’s second largest automaker.

Brussels-based RHJ International, the third bidder, is part-owned by US private equity group Ripplewood and owns stakes in auto parts firms including Niles and Asehi in Japan, Belgium’s Honsel – and Columbia Music Entertainment.

Magna, which already assembles Saab, BMW and Mercedes vehicles under licence and which offered to buy Chrysler from Daimler in 2007, is seen as favourite in Berlin and Detroit but talks are ongoing with all three bidders.

The fate of Opel, an industrial icon dating back to the 19th century and directly employs around 25,000 people in Germany, has become a hot-button political issue with barely four months to go until general elections.