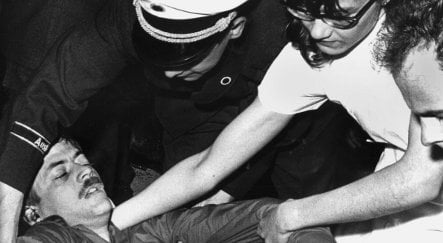 “Murder does not fall under the statute of limitations,” Carl-Wolfgang Holzapfel, head of a national organization for the victims of Stalinism (VOS), told a press conference.

The circumstances of the incident have remained vague through the years, and Kurras, now 81 and living in Berlin’s Spandau district, has been twice acquitted of negligent homicide in Ohnesorg’s death, once soon after the shooting in 1967 and again in 1970. New criminal charges have been filed in light of the new information, authorities said Friday.

But new evidence revealed by the Office of the Federal Commissioner Preserving the Records of the Ministry for State Security of the GDR (BStU, or the Birthler office) claims that Kurras may have been an unofficial agent for the Stasi beginning in the mid-1950s. He allegedly committed to spy on the West German police for the Stasi as an IM under the pseudonym Otto Bohl. Further documents also show he was a member of the East German socialist party.

It is not clear whether the shooting was related to his Stasi connection, though.

“The whole story of Benno Ohnesorg must be newly addressed in light of this new information,” political scholar Gerd Langguth said, adding that the revelation does not come as a surprise because many people knew the Stasi had infiltrated West German security forces.

A photo of the incident, in which a young woman holds Ohnesorg as he dies on the pavement in front of a VW Beetle is one of the most iconic from this period in German history, and the incident made Ohnesorg a martyr and fuelled explosive leftist student protests against what they saw as a repressive state in the following years. This activist student movement came to be known as the ‘68ers.