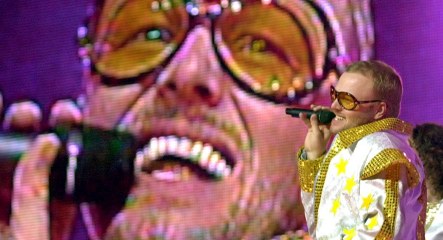 ARD had been hoping to conclude a quick deal with Raab in the wake of Saturday’s embarrassing result, when Germany’s entry, “Miss Kiss Kiss Bang” by the duo Alex Swing Oscar Sings! finished 20th out of 25. The nation was riven with derision and shame in the days that followed.

In an interview which will appear in Monday’s edition of Der Spiegel, Raab gave a withering assessment of the state broadcasters bureaucracy. “They asked us for help. We presented them with a coherent, complete concept. But the decision-making process at the ARD is so complicated that it was incompatible with the way we work. Our contest was going to be called Bundesvision Song Contest.”

Raab was courted by the ARD because of his past Eurovision successes, which include a respectable fifth place in 2000 with his jokey song Wadde Hadde Dudde Da, in addition to composing a seventh-place song in 1998 and an eighth-place song in 2004. Raab would have returned the selection process to a televised contest based on viewer calls, instead of a secret ballot competition conducted by ARD’s regional broadcaster NDR.

Friday’s announcement ends days of speculation about the possible collaboration between ARD and Raab, who has enjoyed enormous TV success in Germany as a moderator for the ProSeiben network.