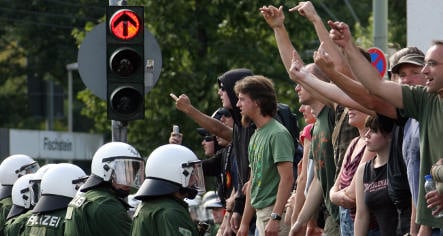 The parade will represent an alliance of around 30 radical leftist groups, and its motto will be “Something better than the nation – against the rule of false freedom.”

“We expect to be able to stage a political demonstration, and we hope the police won’t obstruct us.” a spokeswoman for the organisers said on Friday, calling for a peaceful demonstration.

But she added, “We want participants to express their resentment of the government celebrations.”

In a speech during an official anniversary ceremony on Friday, President Horst Köhler called on Germany to continue the process of re-unification. “Unity is like democracy: it is never finished,” he said. “It is has to be lived, tested, constantly re-examined in our everyday lives.”

Köhler drew attention to the bitterness that many Germans still feel at the disparity in unemployment between the former East and former West of the country. “This compels us to renew our efforts. We must not accept the fact that the division of the nation lives on in the unemployment statistics,” he warned.

The president, who stands for re-election on Saturday, also repeated his call for Germans to use the current financial crisis as an opportunity to create a “new, ecological, industrial revolution.”

On the eve of the presidential election, which will be decided by a secret ballot of 1,224 parliamentarians and other public figures belonging to the Federal Assembly, Köhler received unexpected praise from Left party chief Lothar Bisky.

Bisky, speaking on a radio show on the Südwestrundfunk praised Köhler because, unlike his predecessors, Köhler showed signs of being “truly interested” in the situation in former East Germany. He said it was possible that some members of his party could vote for Köhler over their own candidate, television actor Peter Sodann.