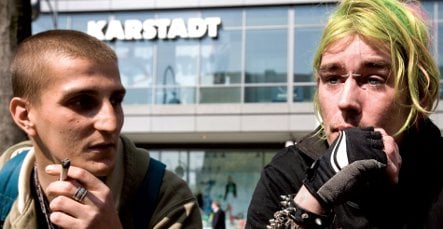 The view is stunning. You look over the rooftops of the city: there’s nothing but blue sky above you.

“I never wanted to live in Neukölln,” Wiebke says.

But then she found this maisonette apartment. One-hundred-and-sixty-three square metres, two floors, €4.50 per square metre.

“The rents are just so cheap here,” says the 27-year-old Hamburgerin. On her roof terrace, the latest issue of Vogue lies on the bench next to the coffee table.

“Neukölln is not as crummy as you’d think,” she adds, crossing her long legs and displaying a pair of strappy, high-heeled sandals.

“Actually, when you step out on a sunny day like this, you feel like you’re on a summer vacation in Istanbul.”

Wiebke has lived on Richardstraße since last year. She founded her own start-up while she was still a student. Some might call her a yuppie. She is, but in the positive sense of the word: she has worked hard to get to where she is now. She was one of those pioneers who were drawn to Neukölln by its low rents and rough charm – and love it there.

With people like her around, hip new cafés like Ä on Weserstraße or Rudi Marie on Weichselplatz have moved in. This is the heart of the “Neu-Cooln” that made the German headlines.

Seven floors down and one U-Bahn stop away, Punky sits in Hermannplatz with his friends. He’s got a bottle of Sternburg in the one hand and a joint in the other.

At 30, Punky is unemployed: an ex-junkie now clean, he claims, thanks to methadone. He has Hepatitis C. He talks about his days on Hermannplatz, about fights with Turkish drug gangs, about knocked-out teeth and broken jaws.

But these days, life is good for Punky. Last night he found a stack of beer bottles on a burnt-out Landwehrkanal restaurant boat. Since then, he and his friends have been having a party. It’s 11 in the morning and his pupils are as small as pinholes.

Two realities, one district. According to Neukölln’s boss, the Bürgermeister and 60-year-old born-and-bred Neuköllner Heinz Buschkowsky, Wiebke’s rosy planet is far-removed from reality. Back to earth: “The situation is drastic … Neukölln has become a receptacle for disadvantaged members of society.”

The statistics are indeed alarming. According to a study published last November, social problems are twice as prevalent in Neukölln as in Berlin as a whole. The unemployment rate is shockingly high: every fourth Neuköllner does not have work (24.8 percent compared to the 14.5 average for Berlin). Up to 40 percent of the local immigrant population is jobless. Neukölln has become the capital of Hartz IV recipients.

The study’s conclusions are harsh: “Positive trends don’t reach Neukölln.” As a matter of fact, cheap rents haven’t only drawn cool students and daring yuppies, but also poor people from across the city. And for anyone comforted by the thought that the “Neu-Cooln” trend would have a positive impact on the situation, the facts will be disillusioning. If there is some progress in one part of the Bezirk, the problems simply relocate. Northern Neukölln, for example, is turning into a social ghetto. The bleak streets around Schillerpromenade are lined with countless internet cafés, cheap tailors and one euro stores, and frequented by gangs of kids that have nowhere to go during the day.

The situation of youths like these is especially worrisome: 70 percent of Neukölln’s children come from families that live on Hartz IV or other welfare benefits and are more susceptible to sliding into drug abuse or petty crime. They’re also particularly vulnerable to a certain kind of paedophile who prey on their forlorn condition and material need: little gifts – a PlayStation perhaps? – are used to win the children’s trust. That’s why Berliner Jungs, a non-profit organization that helps sexually-abused boys, has its central counseling office in the Schillerkiez.

“No matter which kid you ask on the street here, something has happened to him,” Berliner Jungs’ Wolfgang Werner says.

Back at Wiebke’s loft, the young entrepreneur takes a deep drag from her cigarette.

“Of course, there’s a second reality in Neukölln. But you see it only if you try to look for it. I guess that’s not good.”

Many choose to ignore that reality in the happy-go-lucky side of these parallel worlds. Ramona Diedrich, 39, is standing eating a currywurst. In her arms, she is holding one-and-a-half-year-old Samira, whose father is of Arab origin. The family lives a couple of blocks away from Hermannplatz, on Mainzer Straße. Glancing over at Punky and his friends, she shrugs her shoulders.

“You just try to avoid these people,” she says. “Apart from that, I love living in Neukölln. I love the people who live here. This variety, I need that!”

And this is the answer you get from almost everyone you randomly ask on the street. The new Neuköllners love the multikulti, the feeling of ‘real life’ they find on its streets, and the old established Neuköllners are happy about the hip young things because they are making the Bezirk livelier.

All in all, the perception on the ground seems absolutely at odds with the statistics.

“The different people who live here blend together into one colourful mixture,” Melanie says, drawing an on-tap beer. She works as a waitress at a restaurant that opened two years ago on Pannierstraße, just around the corner from the infamous Rütli-Schule.

Melanie lifts the tray and hurries out to the tables where a crowd of artists and students sits. The sweet smell of shisha smoke hangs in the air. On the other side of the street, a group of adolescent Turkish guys passes by. One of them points to the bar and shouts out its name: “Freies Neukölln.”

The group laughs. Then they walk on, disappearing down Sonnenallee.