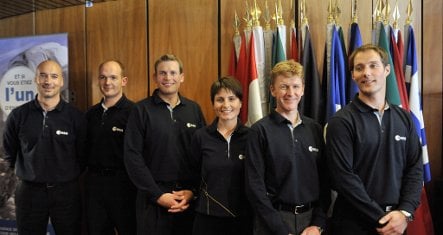 Gerst is the second on the left. Photo: DPA

Alexander Gerst – along with an Italian man and woman, two Danish men, a Frenchman and a Briton – will join a team of eight other astronauts already part of the ESA team.

Gerst said his nomination is the fulfilment of a childhood dream inspired by his grandfather, a hobby radio operator. The physicist said he was “proud” to be part of the new team of European astronauts.

Government coordinator for space exploration Peter Hintze said the nomination was a great day for Germany, adding that he hoped a German could someday set foot on the moon.

The group was chosen out of 8,400 applications from around the globe. Applicants in good health with fluent English and a background in physics, chemistry, or medical research were considered for the coveted spots.

New astronauts will train for space missions at the European Astronaut Centre in Cologne and begin their service in 2013, the ESA said.

Germany has had 10 other astronauts in the past, one of whom – Hans Schlegel – still serves as an active astronaut with the ESA.