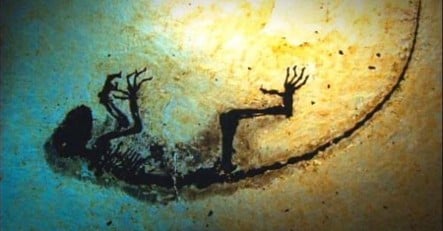 The tiny creature, officially known as Darwinius masillae, but dubbed Ida, lived 47 million years ago and is unusually well preserved, missing only part of a leg, or five percent of the skeleton.

Check out photos of Ida!

The finding, described Tuesday in the PloS ONE scientific journal, was displayed at a press conference at New York’s Natural History Museum, and is due to be the subject of a documentary on the History Channel, BBC and other broadcasters.

Organizers said that scientists led by Norway’s fossil expert, professor Jorn Hurum, worked for two years on Ida, first discovered in 1983 by private collectors who failed to understand her importance – and split the bones into two lots.

The monkey-like creature was preserved through the ages in Germany’s Messel Pit, a crater rich in Eocene Epoch fossils near Frankfurt.

Although bearing a long tail, she had several human characteristics, including an opposable thumb, short arms and legs, and forward facing eyes.

She also lacked two key elements of modern lemurs: a grooming claw and a row of lower teeth known as the toothcomb.

“This is the first link to all humans – truly a fossil that links world heritage,” Hurum said in a statement.

David Attenborough, the renowned British naturalist and broadcaster, said the “little creature is going to show us our connection with all the rest of the mammals.”

“The link they would have said until now is missing… it is no longer missing,” he said.

Ida gives a glimpse into a time when the world was just taking its present shape. Dinosaurs were extinct, the Himalayas were forming and a huge range of mammals thrived in vast jungles.

According to the international team, Ida had suffered a badly broken wrist and that this might have been her undoing. The theory is that while drinking from the Messel lake she was overcome by carbon dioxide fumes and fell in.

“Ida slipped into unconsciousness, was washed into the lake, and sunk to the bottom, where the unique conditions preserved her for 47 million years,” a statement said.

Her last meal shows she was a herbivore. Gut contents revealed remains of fruits, seeds and leaves.

“This fossil is so complete. Everything’s there. It’s unheard of in the primate record at all. You have to get to human burial to see something that’s this complete,” Hurum said.

The press conference was unusually strongly hyped for a scientific event and the announcement was tied into a media campaign including the release of the documentary.