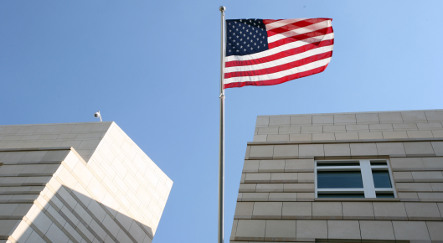 Will he take up office at the new Pariser Platz embassy? Photo: DPA

Murphy, national finance chairman for the Democratic National Committee since 2006, is at the top of Obama’s short list to replace Bush’s nominee William R. Timken Jr., the magazine said.

The 52-year-old, who has good contacts in Germany after serving as head of the Goldman Sachs German division and living in Frankfurt in the 1990s, cancelled two previously booked engagements in the country in April.

“I’ve been told urgently not to leave America,” he reportedly explained.

Obama hopes to have new ambassadors to Europe’s top posts – Paris, Brussels, London and Berlin – in place before an early June visit to Germany and France.

The father of four is said to be charming and worldly, “unlike the other two ambassadors from George W. Bush,” Der Spiegel said.

“Murphy was engaged in German-American relationships for many years – a good choice,” former ambassador to Germany during the Clinton years, John Kornblum told the magazine.

Press spokesperson for the German Embassy in Berlin Bruce Armstrong told The Local there had been no word from Washington on the new nomination yet.

“When the White House nominates someone, then it will be official – until then it’s all speculation,” he said, adding that once this happens the new ambassador won’t arrive in Berlin until he or she is confirmed by the US Senate.