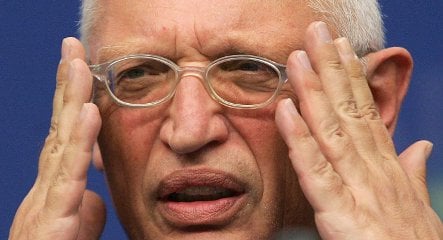 Günter Verheugen, the EU’s Industry Commissioner, told the Süddeutsche Zeitung daily in an interview: “Nowhere in the world, not even in America, were banks so ready to take incalculable risks, especially the regional banks.”

But Berlin hit back instantly saying Verheugen’s comments showed a “surprising lack of knowledge” of the situation in Britain and the United States and shifting the blame for the crisis back to Brussels.

“In fact the federal government was surprised at the commissioner’s comments,” Thorsten Albig, a spokesman for the finance ministry told a regular briefing. “They show a surprising lack of knowledge of the current situation and a lack of understanding of what has happened in the US and in Britain in the past two years,” he added.

Albig said that what he described as the commission’s “aggressive deregulation policy” was in fact at least partly to blame for the current financial market and economic crisis.

The commission’s policies “have definitely at least had an influence on what we are experiencing today,” Albig said.

In the interview, Verheugen also attacked the German regulators, saying that financial oversight in Germany had been insufficient and inadequate compared to other countries in the EU.

“In Germany and in other countries the regulators just let things run their course. Other countries dealt better with their banks. Italy for example. There is no toxic paper there,” said Verheugen.

In the future, regulators must examine new financial products very carefully, he insisted.

“I would have nothing against the idea of needing permission for highly risky assets,” he said.

Germany’s banking system – especially the Landesbanken, regional banks that play a vital role in Europe’s largest economy – has been hit hard by the global crisis, caught with billions of euros of toxic assets on their books.

One estimate by the country’s financial watchdog said as much as €355 billion ($478 billion) of toxic assets could be lurking in the regional banking system.