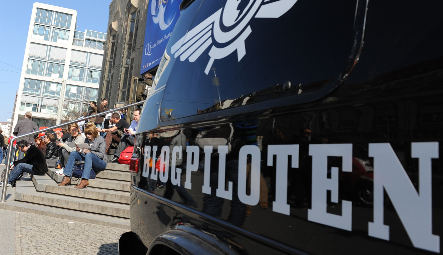 A recent conference in Berlin on blogs and social media. Photo: DPA

Blogs are meant to be provocative, but a good old-fashioned print column can apparently still get people fired up if it pushes the right buttons. A special edition of Süddeutsche Zeitung Magazin on journalism two weeks ago asked high-profile blogger Felix Salmon to list ten reasons why Germany has lagged behind other countries in developing a strong blog culture. The response from the German blogger community was swift, dismissive and brutal. But later it was revealed Salmon had only been referring to his own speciality of econoblogging and not German blogs in general as it was presented by Süddeutsche. The Local contacted him to help set the record straight.

TL: How does it feel to be the whipping boy du jour of the German blogosphere?

TL: Were you aware your column was picked up by the Süddeutsche Magazin and that it had kicked up such a stink in the German blog world?

I actually wrote the column at the request of Süddeutsche Magazin – I pride myself on taking requests, and in this case they were going to pay me, too. But I didn’t get to see the column after it was edited and before it appeared, so I wasn’t aware that they had taken out the references to econoblogs in particular, or the stuff about the language problems.

TL: What does it say about Germany’s old media when they alter your copy to include all German blogs instead of just ones focused on economic issues and that they also failed to mention you’ve moved to Reuters?

That was a little weird, but I’m hesitant to generalise from one instance. I’d already been at Reuters for about three weeks when the initial blog entry appeared on reuters.com, so I don’t really understand the attribution to Portfolio – where I used to work.

TL: Are the German critics of your post completely missing the point that blogs are meant to be irreverent and provocative?

You’d probably better ask them that. But yes, I think they might, in some instances, have failed to understand that the whole point of the column was to throw a few bombs.

TL: You’re half German – do you think your blog would work in the language of Goethe and Schiller?

It would be harder, to be sure. Blogs are a conversation, and there are many fewer German-language econoblogs to converse with. And as I tried to explain in the piece, Germans in general have better things to do than listen to unqualified bloggers opine on random subjects.

TL: Do you have any favourite German blogs and if so which ones?

Not really, but that’s mainly my fault for not having good enough German to be able to read them at my normal blog-reading speed – which is very fast.

Felix Salmon blogs daily about economics and finance at reuters.com.