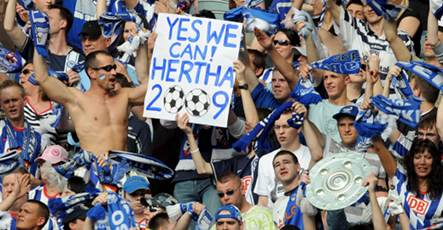 Midfielder Pal Dardai promised fans in March that if at least 55,000 of them showed up to the team’s next five games, he’d give free beer to fans at the team’s last home game of the season.

Those who didn’t want beer could also order water or soft drinks.

Turnout at the five games easily beat that number and on Saturday, the 33-year-old Hungarian player made good on his promise. Over 74,000 spectators at the sold-out game got a coupon for free suds before the kick-off against FC Schalke on Saturday.

Hertha is currently in third place in the Bundesliga, just behind leader Wolfsburg and second-ranked FC Bayern.

Hertha’s last regular season game is May 23 against Karlsruhe.