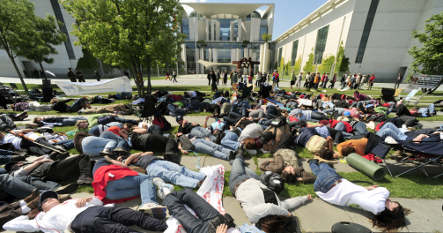 The six women stopped eating Wednesday and vowed to continue their protest until Merkel agrees to speak with them about organising an emergency national milk summit.

The women have been camping in a field next to the chancellery building in Berlin since Sunday night along with about 150 mainly female dairy farmers. They have set up life-sized plastic cows in the colours of the national flag.

“Milk has got to become the chancellor’s business now that the situation on the market has become so dire,” Christine Schneebichler, one of the six hunger strikers, told AFP.

The protest attracted extensive media coverage five months ahead of a national election.

Schneebichler, who is on the board of the German Alliance of Dairy Farmers and has a herd of 50 dairy cows in southern Bavaria, said she and the other protesters were drinking fruit juice and tea but pledged not to eat until their demands are met.

“Merkel has made it her responsibility to help the auto industry and the banks – now it is time to help the farmers,” she said, referring to billions of euros in state aid and loan guarantees made available since the start of the financial crisis.

The farmers began mobilising when several suppliers, including the no-frills supermarket Aldi, this month lowered the price of milk from €0.55 to €0.48 per litre leaving only between €0.20 and €0.25 cents per litre for farmers.

The producers blame a glut of milk in part on the European Union, which has agreed to phase out milk production quotas – which served to stabilise prices in the past – by 2015.

The price of milk has halved on average in Europe in the past 18 months.

A number of EU nations have called for the milk production quotas to be kept in place for now, saying the sector is fighting for survival because of plunging prices.

Federation of German Dairy Farmers chairman Romuald Schaber, who is also president of the European Milk Board, said that with operating costs rising, the fall in prices will mean up to 30 percent of farmers could go bust.

The protesters have the support of Agriculture Minister Ilse Aigner from the Christian Social Union, the Bavarian sister party to Merkel’s Christian Democrats, who has called for tax cuts for struggling farmers.