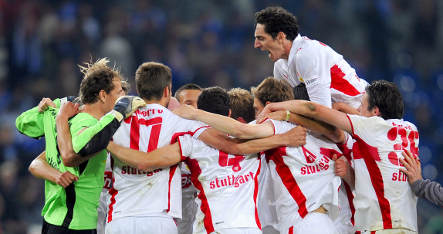 Stuttgart are fourth in the table, but only two points separate the top four teams with Wolfburg, Bayern Munich and Hertha Berlin – who all won on Tuesday – still in contention to be crowned champions when the season ends on May 23.

“That was a very important win for us,” said Stuttgart coach Markus Babbel, whose side now face Energie Cottbus and Bayern in their last two games and need to finish in the top three to qualify for the Champions League.

“Now we have to be just as focused against Cottbus and then set ourselves up for the last day of the season clash with Bayern Munich. It is important to keep winning and try to get the European place.”

Stuttgart’s Brazil striker Cacau put his side ahead on 15 minutes with a good strike from 20 metres, but Schalke came back when Croatia midfield Ivan Rakitic curled in a free-kick on 39 minutes to make it 1-1.

In the second-half, Germany midfielder Thomas Hitzlsperger drove a shot at Schalke goalkeeper Manuel Neuer who could only parry his shot and Marica stabbed home the ball on 56 minutes to give his side three points.

Hamburg are fifth, but remain five points behind the leaders, effectively putting them out of the title race, after Croatia striker Ivica Olic netted twice as they hammered Bochum 3-0.

In the relegation battle, Borussia Mönchengladbach took a huge step towards safety with their second consecutive win when Brazilian Dante scored in injury time to seal a 1-0 win over Energie Cottbus.

The result leaves ‘Gladbach 14th, but only three points separate the bottom four places while Hoffenheim are seventh after their 2-0 win at Arminia Bielefeld.

On Tuesday, Wolfsburg striker Edin Dzeko scored twice along with Grafite in the German league leader’s 3-0 win over Borussia Dortmund.

With Hertha winning 2-0 at Cologne and Bayern Munich enjoying a 3-0 victory over Bavaria neighbours Bayer Leverkusen, Wolfsburg stay top only by virtue of a better goal difference.

Bayern also have 63 points, but are two goals worse off. Hertha are third on 62 points.

Defending champions Bayern, who on Wednesday named Louis van Gaal as their new coach, scored all their goals after the half-time break with Luca Toni, Franck Ribery and Lukas Podolski all on target.

Hertha Berlin are in touch with the leaders after their 2-1 win at Cologne thanks to Brazilian Cicero and midfielder Patrick Ebert while the home side pulled back a late consolation goal.

Bottom side Karlsruhe look almost certain to be relegated as they squandered a 2-0 lead to slump to a 3-2 defeat at home to Hanover and the league’s last team are four points from safety with two games left.