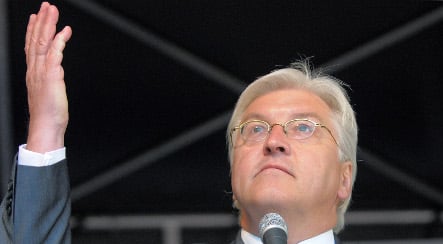 Those surveyed were asked whom they would vote for if September’s elections were held next Sunday. With campaign activities already underway, the SPD booked 26 percent of voter support, the magazine said. The party has chosen Foreign Minister Frank-Walter Steinmeier as their candidate for chancellor.

But the SPD still lagged far behind the party’s grand coalition partners, the conservative Christian Democrats (CDU) led by Chancellor Angela Merkel. The CDU managed to increased its popularity one percentage point to 36 percent.

The pro-business Free Democrats (FDP), who will hold their party convention next week, gained two points to reach 14 percent.

The environmentalist Greens remained at 9 percent, and the hard-line socialist Left party stayed at 10 percent.

Some 74 percent of poll participants face smaller pensions as the recession takes hold in Germany, the magazine said. Meanwhile some 22 percent said they trust in the government’s pension guarantees.

The poll was conducted by the Forsa Institute and questioned 2,501 Germans between May 4-8.