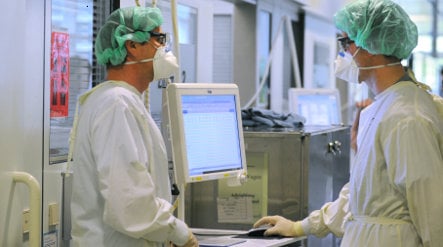 Schaar has filed a legal report based on evidence that insurers illegally sold protected data in at least two cases, the paper reported. Information included statesments such as “no teeth” and “ill with cancer.”

Public prosecutors in Oldenburg and Aurich are investigating public health insurer IKK Weser-Ems, which merged with HKK in 2008.

The personal data may have been used by private insurers to target customers for supplemental private health plans.

Thanks to the persistently warm and dry weather across Europe this summer, wasp populations are on the rise, with pest controllers in France even dubbing 2022 ‘the year of the wasp’.

The peak of wasp season is still to come, however, as wasps tend to reach their maximum population between September and October. Here’s what you need to know about dealing with the stripy insects in Germany.

Is it illegal to kill wasps in Germany?

In short: yes. There are hundreds of wasp species in Germany, some of which are particularly endangered and are on the so-called “red list” of threatened animal and plant species.

Since they are a protected species, killing the insects is generally prohibited under the Federal Nature Conservation Act, and anyone who gets caught deliberately killing a wasp could face a hefty fine.

In North Rhine-Westphalia and Thuringia, a wasp-killer can face a fine of up to €50,000 while in Saarland, Baden-Württemberg, Brandenburg and Mecklenburg-Western Pomerania, the maximum fine is up to €20,000. In the other federal states, catching, injuring or killing wasps can cost up to €5,000.

In the case of a specially protected wasp species such as the gyroscopic or button horn wasp, fines range from €10,000 to €65,000, depending on the state.

Though they may be somewhat pesky, biologists and nature activists generally agree that wasps aren’t dangerous, at least to those who are not allergic to their stings. They are typically not aggressive unless threatened and will tend to flee rather than fight.

It would also take at least 50 to 100 stings to actually overdose on wasp venom, but severe allergies and accidents (while running away from a swarm, for example) could be more dangerous.

How do I keep wasps at bay?

There are a few tried and tested tricks you can use to ward off wasps.

Firstly, as wasps are primarily attracted to meat and sweets, you should keep these foods well covered as much as possible.

Wasps don’t like getting wet, so having a water spray bottle on the picnic table can come in very handy for keeping the critters at bay. Don’t go overboard with the spray, though, and don’t be alarmed if the wasp doesn’t move for a while after you’ve given it a dousing. As soon as its wings are dry, the insect will fly off.

READ ALSO: How to deal with fruit flies (and other critters) plaguing your German flat

Distraction tactics also work well: a bowl of overripe fruit – such as grapes – placed at a safe distance can be a good way to keep wasps away from you.

One homemade deterrent you can try is a lemon cut in half, sprinkled with a few cloves, which is a particularly unpleasant scent for the insects.

How should I react to wasps?

If the uninvited guests do join your barbecue or picnic, you shouldn’t panic. “Take it easy” is the best motto when dealing with the black-and-yellow insects.

You should avoid abrupt movements and not lash out or blow in the direction of the animal as exhaled carbon dioxide makes the normally calm animals aggressive, and do not try to hit them or make any sudden movements.

What if I find a nest?

First of all, keep your distance – ideally at least five metres. Nests can host thousands of wasps and they will become aggressive if they feel threatened.

According to the Species Protection Information of the Berlin Senate Department wasps are subject to general protection and may “only be controlled if there is a reasonable reason to do so.” In other words, finding a wasp nest in your house doesn’t necessarily mean you can call pest control to come and get rid of it.

The German Nature Conservation Association (NABU) advises those who come across a nest to seek advice, either by getting in contact with them directly or with your local environmental agencies or nature conservation authorities.

What should I do if I get stung?

If you are unlucky enough to get stung by a wasp, the first thing to do is to carefully clean the puncture site. NABU also recommends cooling the sting site and treating it with insect creams which you can get from your local pharmacy.

READ ALSO: Ticks in Germany: How to avoid them and what to do if you get bitten

Alternatively, you can use the old homemade remedy of cutting an onion in half, making an incision so that the juice can escape more easily, and rubbing it into the puncture site. This not only has a cooling effect but can also act as a disinfectant and anti-inflammatory.

For allergy sufferers, however, a wasp sting can be very dangerous. NABU recommends that allergy sufferers always carry emergency medication with them and if in any doubt, go straight to the emergency department of the local hospital.