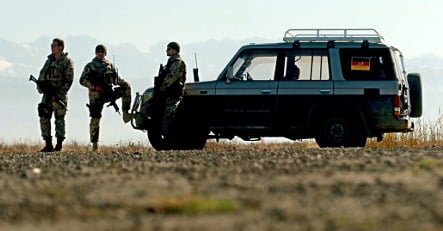 Last week German soldiers captured a Taliban leader after a raid which marked something of a shift in German attitude towards its operation in Afghanistan, which has been harshly criticised by other countries with troops in the country for being risk-averse.

Analysts say the more muscular posture comes not only in response to a growing threat but also from a desire to quash doubts in the United States and among other allies that Germany is fully committed to stabilising Afghanistan.

Coming just three days before a visit to Berlin by Afghan President Hamid Karzai, the capture of alleged insurgent leader Abdul Razeq blamed for a string of high-profile attacks in northern Afghanistan, was trumpeted by officials in Berlin.

“With this successful operation, which was long planned and in which a major terror suspect was arrested, German forces demonstrated their effectiveness,” Defence Minister Franz Josef Jung said.

A state secretary at the ministry, Christian Schmidt, added that Abdul Razeq was “not the only one we have in our sights”.

And a ministry spokesman said Friday: “Those who attack our soldiers need to know that they will be hunted.”

Taliban on the offensive?

But Der Spiegel magazine reported in its latest edition that the Taliban was planning massive attacks on German soldiers to put pressure on politicians as the September general election draws close.

They are hoping that they can overturn the slender majority in the German parliament currently in favour of the Afghan operation, by provoking violent confrontations with German soldiers.

The magazine said a high-ranking US officer said that the militants were planning to pull out of the south and east of the country, held by American soldiers, and were planning to attack in areas where they could expect less resistance – in the German-held north.

Until now – to the frustration of some of its NATO allies – Germany had put the emphasis on reconstruction and training in Afghanistan, where it has the third largest contingent behind the United States and Britain.

Berlin has long said its priority is to help Afghanistan begin to ensure its own defence and rebuild after several war-ravaged decades.

But those goals “are under threat by a growing number of attacks,” which is why the German government is beginning to talk tough, said Henning Riecke of the German Council on Foreign Relations, a Berlin think-tank.

Riecke said the message was also targeted at Washington to show the administration of US President Barack Obama that it takes all aspects of the NATO’s ISAF mission in Afghanistan seriously, not just reconstruction.

German troops bitterly report that GIs have taken to reinterpreting the mission’s acronym to “I Saw Americans Fighting” to complain about the burden-sharing in the country.

“They’ve been under pretty sustained attacks on the part of the allies who have questioned the seriousness of the German commitment,” said Daniel Korski a London-based analyst with the European Council on Foreign Relations.

Germany has 3,800 soldiers based in the relatively tranquil north of the country – the number will rise to 4,400 ahead of a presidential election in August – while US, British and Canadian troops are battling the Taliban in the south.

A total of 32 German soldiers have died in Afghanistan since their deployment in 2002. US and British troops also frequently criticise the Germans’ rules of engagement, which outlaw firing on militants if they are retreating and actively trying to snuff out the booming narcotics trade.

“The concern is that under the German approach, because there is too much concern about force protection, not enough is effectively being done,” Korski said.

“Too much (enemy) activity in the area could ultimately reverse the progress that has been seen to this day. I wouldn’t be surprised if the Germans wanted to address that.”