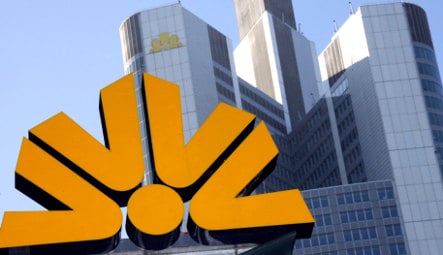 Commerzbank, the second-biggest German bank, has received more than €18 billion ($24 billion) in fresh capital from the German government, which now owns just over 25 percent of the bank.

The European Commission approved the second instalment of aid on Thursday in exchange for a large-scale sale of Commerzbank’s assets.

“We firmly intend to reimburse all of that money,” Blessing told reporters.

He did not rule out a capital increase to raise the necessary funds, however.

After ending 2008 with a catastrophic loss of €6.6 billion owing to the integration of ailing Dresdner Bank, the “new Commerzbank” remained in the red in the first quarter of 2009.

It posted Friday a net loss of €861 million, compared with a profit, on an equivalent asset base, of €236 million in the same period of last year.

The loss was bigger than expected, and Dow Jones Newswires quoted UniCredit analysts as expressing concern that heavy interest payments on the state aid would weigh on Commerzbank’s results for several years.

Shares in the bank lost a meagre 0.08 percent to €6.16 in afternoon Frankfurt trading, while the DAX index of leading shares was 2.90 percent higher overall.

In the first three months of 2009, Commerzbank also booked €1.2 billion in charges against the deteriorating value of its assets, while risk provisions leapt 32 percent from the first quarter of 2008 to €844 million.

Costs related to the integration of Dresdner Bank, which was fully acquired in late January, trimmed another €290 million from the bottom line.

But Commerzbank stressed that the restructuring would pay off later on and forecast a profit by 2011 at the latest, and an operating profit of more than €4 billion by 2012.

“Overall, things have gotten better from January to March with respect to the fourth quarter” of 2008, Blessing said.

He pointed to solid results from retail operations and loans to small and medium-sized enterprises.

Commerbank planned to focus on retail operations in Germany and Poland, and on financing operations of German companies abroad.

Most of its investment banking operations would also involve German clients.

“We want to make Commerzbank the investment bank for Germany,” Blessing said.

“Local markets in other countries no longer interest us.”

The scaling back of Commerzbank’s operations is in line with conditions set by the European Commission for its approval of government aid.

The bank’s investment and real-estate division Eurohypo is to be sold by 2014, and the loss of 390 jobs at the unit will come on top of 9,000 posts being cut worldwide by Commerzbank as a result of its Dresdner takeover.