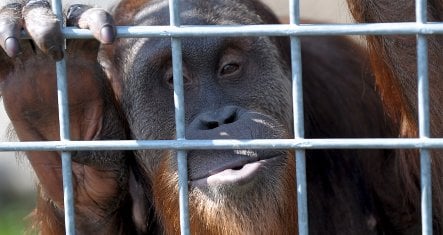 The 14-year-old Ujian is both a clever and talented fellow, according to Bernd Kowalsky. As the director of the zoo’s apes department, he’s watched the orangutan pick up whistling as a pastime over the years.

“Ujian has developed his own multiple-tone whistling technique,” said Kowalsky, who speculated that he might have been inspired by whistling members of cleaning crews or the noisy monkeys nearby.

The orangutan artiste certainly would appear to have his own motivations for pursing his lips and blowing, but a Heidelberg-based music producer decided to record his finer moments for a CD now being released by the zoo.

“I am Ujian” mixes the ape’s whistling with jungle sounds and some singing by a human. Various renditions – including a jaunty house track and a karaoke version – will go on sale in June for €3.99.

“If there are any profits it will all stay with the zoo to refurbish the ape enclosure,” said producer Christian Wolf, who spent hours putting together a catchy melody with Ujian’s work. “I’m from Heidelberg and frequently go to the zoo with my kids. I’d just be happy to help the apes.”

But the orangutan seems to have a ready-made audience just waiting for his CD.

“I’ve never seen so many people whistling in front of the orangutan cage,” said Kowalsky.

But Ujian is largely unimpressed by his human groupies – he’s more interested in using his musical skills to impress the two female orangutans that live with him.