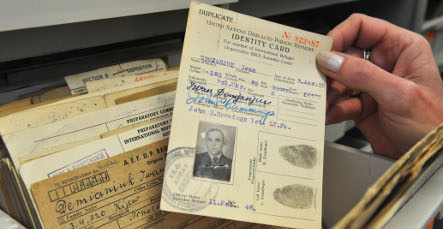 Justice John Paul Stevens denied the emergency request without comment, but Demjanjuk has the right to appeal the decision to the full court.

Demjanjuk’s family did not immediately say whether they planned to appeal.

However, his son issued a statement in which he reiterated that there “remains no credible evidence that he ever hurt one person let alone murdered anyone anywhere.”

“This is not about justice; it’s about a vendetta in the falsified name of justice with the hope that somehow Germany will atone for its past,” John Demjanjuk Jr. wrote in an email.

The Department of Justice said it could not “provide any details on any possible timing of a potential removal.”

“The US government will continue to work in cooperation with the government of Germany to affect the removal of Mr Demjanjuk to Germany,” spokeswoman Laura Sweeney said.

The decision is the latest development in a decades-long saga over the 89-year-old former autoworker’s wartime actions.

In a dramatic twist last month, the octogenarian won an 11th-hour reprieve when a US federal appeals court stayed his deportation shortly after he was carried out of his suburban Cleveland, Ohio home in a wheelchair to be put on a flight to Munich.

That reprieve was lifted last week when the court threw out an attempt to block deportation on health grounds. His family submitted an appeal to the Supreme Court on Wednesday.

Demjanjuk suffers from a host of health problems, including kidney disease, bone marrow disease, arthritis and severe back pain.

His family and lawyer have argued that the long flight to Germany and subsequent imprisonment and trial would cause pain tantamount to torture.

They also filed motions in Germany to block the extradition, saying the Ukrainian-born Demjanjuk would have nowhere to go if he was acquitted in Germany because being stripped of his US citizenship had left him stateless.

That suit was rejected Wednesday by a Berlin court which said Germany is not obliged to prevent the deportation, is not in a position to stop it and cannot send him back because of the pending charges in a Munich court.

Born in Ukraine in 1920, Demjanjuk was a soldier in the Red Army when he was captured by the Nazis in the spring of 1942.

He was trained at Treblinka in Nazi-occupied Poland and served two years in the camps of Sobibor and Majdanek, also in occupied Poland, and in Flossenburg in Bavaria, southern Germany.

Demjanjuk has always insisted that he was forced to work for the Nazis and had been mistaken by survivors for other cruel guards.

He immigrated to the United States in 1952 with his family, settling in Ohio, where he found work in the auto industry and changed his name from Ivan to John.

Condemned to death in Israel in 1988 after he was convicted of being the sadistic Nazi guard nicknamed “Ivan the Terrible,” the verdict was overturned by the Israeli Supreme Court because of doubts about his identity.

He was returned to the United States over strenuous objections from Holocaust survivors and Jewish groups, who argued there was sufficient evidence that he served as a death camp guard to warrant another trial.

Demjanjuk regained his US citizenship, which was first stripped in 1981, after an appeals court ruled in 1998 the US government recklessly withheld exculpatory evidence.

In 1999, the US government filed new charges using fresh evidence that surfaced following the collapse of the Soviet Union, and he was again stripped of his US citizenship in 2002.

Germany issued a warrant for Demjanjuk’s arrest on March 11 on charges of assisting in the murder of 29,000 Jews.