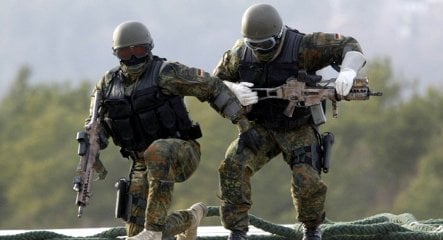 He was captured by KSK officers like this. Photo: DPA

“He will hopefully be quickly tried in Afghanistan according to the constitutional law,” Schmidt told broadcaster Bayrische Rundfunk, adding that German forces have other high-level Taliban members in their sights.

The man, identified as Abd al-Racik, is thought to have close ties to the Taliban in Pakistan and the drug mafia. Believed to be the Taliban commander in the province of Badakshan in northeastern Afghanistan, al-Racik is suspected of involvement in a series of attacks on German soldiers and Afghan security forces.

He has been handed over to special prosecutors in Kabul, Schmidt said.

“They must handle him the way we have agreed with the Afghans, which means that neither torture nor death penalty can be imposed,” he told the station.

The Islamist leader was under surveillance by the German army for months and was originally meant to be captured in an operation on Wednesday night. But the man was able to flee into the mountains after his aides recognised the helicopters of the German army flying over the region. That sparked an hours-long chase through the mountains before al-Racik was caught and brought to Kabul.

Germany’s elite KSK forces, comparable to the US Army’s Special Forces, are working in tandem with the regular military in Afghanistan under the mandate of the NATO-led International Security Assistance Force (ISAF). Germany has more than 3,500 troops in Afghanistan.

German forces have come under increasing attack from Taliban insurgents in recent weeks.