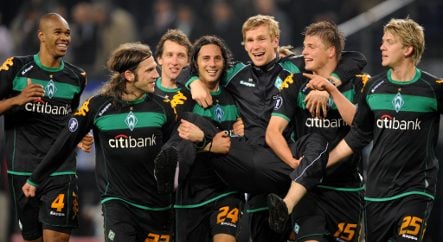 Germany winger Piotr Trochowski had given Hamburg a 1-0 advantage from Bremen’s Weserstadion last Thursday in the first leg, but goals by Diego, Pizarro and Baumann here cancelled out a brace from Hamburg’s Ivica Olic.

“It was a great and open game – sensational,” said Bremen coach Thomas Schaaf. “We always believed we could do it and we kept working until the end.”

Goal-scorer Diego, who is being courted by Italian giants Juventus, said Bremen had decided the game before half-time with a strong performance.

“I think it was a hard game, we decided the game in the first half, this was important for us, we were the best team,” said Diego. “I only hope we can win the final now.”

The Brazilian said he is focused solely on winning the UEFA Cup now.

“Right now, I am just concentrating on Werder Bremen, it is an important moment for me and the club,” he said. “I am 200 percent for Bremen at the moment and any decision on my future will be taken at the end of the season.”

After Bremen knocked out Hamburg on penalties from the German Cup in the semi-finals late last month, this was the third meeting between the two sides who will meet each other again on Sunday in the Bundesliga.

But after Bremen goalkeeper Tim Wiese saved three consecutive penalties in the shoot-out to decide the German Cup semi-final here at the HSH-Nordbank-Arena, it is Werder again who will now play Shakhtar in the Istanbul UEFA Cup final on May 20.

Hamburg had taken the lead on 13 minutes when Croatia striker Olic latched onto a superbly timed pass from Dutch defender Joris Mathijsen which split the defence as Olic flicked his shot over Bremen’s Wiese.

Bremen got back on level terms when Peru striker Pizarro flicked a pass through to midfielder Diego, and the Brazilian stabbed his pass over Hamburg goalkeeper Frank Rost on 29 minutes.

It remained 1-1 at half-time, but the game turned suddenly on 66 minutes when Brazilian defender Alex Silva passed Pizarro the ball and his shot flew past Rost after a deflection.

With less than 15 minutes remaining, Pizarro had the chance to put his side 3-1 ahead when he went one-on-one with Rost, but the Hamburg goalkeeper held his ground and cleared the danger.

But Bremen booked their place in the Istanbul final when the ball was played in from a corner on 83 minutes and as Trochowski tried to kick away the danger, the ball rebounded off the head of Bremen captain Baumann and into the net.

Olic scored again with time running out to give Hamburg a faint hope of reaching Istanbul, but Bremen held their nerve and the players celebrated heartily at the final whistle.