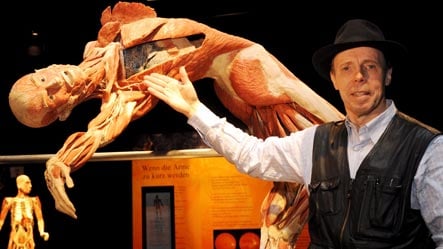 The beginning of life is tender and fragile, but in the embryo caught in the glass tube in the 11th week of pregnancy, it’s already possible to see a human being emerging.

Even the first exhibits in Gunther von Hagens’ new “Body Worlds” show get to you. On display are dead embryos and children in all stages of development, with various deformities. That’s one taboo in the much-discussed exhibition already shattered, and it’s not the most spectacular by a long way.

As part of the “The Cycle of Life” – as the show opening on Thursday at Berlin’s Postbahnhof that includes 200 human “plastinations” is called – human anatomy fan von Hagens has put two dead people having sex on display.

Click here for a photo gallery of the controversial exhibition.

The 64-year-old Plastinator, who invented his own method of preserving living tissue and who looks a bit like an undertaker, is, of course, no stranger to controversy. This time round he let the sensationalist newspaper Bild printed exclusive pictures of the couple (he’s on his back, she’s sitting on top of him facing away), and then a day later it delivered the comments of outraged politicians calling the show “disgusting.”

It was a mini-controversy that helped spark interest in the new exhibtion of Hagens’ by now familiar cross-sections of the prepared corpses.

At a press conference this week, curator Angelina Whalley gushed that Body Worlds had been “totally re-conceived,” while sitting next to von Hagens himself – who, as always, was sporting an arty Joseph-Beuys-style hat and waistcoat. Next to him sat the new in-house philosopher Franz Josef Wetz.

The dynamic Whalley – who happens to be a surgeon and von Hagens’ wife – quickly took over the presentation and pre-emptively refuted the “declamatory outrage” she expected would sweep through the media. Even the phrase “Rest In Peace” was a product of demagogy, said the sun-tanned moralist Wetz, wearing a jaunty t-shirt under his suit jacket, because when it comes down to it, “it’s just a corpse decomposing in the earth.”

All body donors (except, of course, the embryos) had signed documents before their deaths declaring that they could end up as plastinations in imtimate poses, Whalley added before noting many future donors had turned up to the show’s press conference. Recognisable by little plastic badges on their lapels, they were eager to identify themselves and share their views. “Please could you reveal yourselves?” said the organisers, and promptly nearly half the people in the room did so, causing the journalists to glance around a little nervously.

It is these mainly middle-aged, modestly-dressed ‘body-donors’ who nodded approvingly when von Hagens said: “What’s important to me is to not be censored” because of his experiences as an “ex-Ossi” in communist East Germany. Even now, what he calls the malevolent “spirit of the GDR” is threatening his plastination workshops in Brandenburg. Enthusiastic nodding and a lot of “yes, yes!” mutterings could be heard from the donors, while von Hagens repeatedly returned to the subject of Oswald Kolle, the German sex educator whose work he would like to continue – wait for it – posthumously.

Whalley said the show’s organisers are well aware of the great responsibility that comes with the presentation of two copulating corpses. For this reason, there is an absolute photo ban (except for photographers from Bild) in the completely separated room, and children under 16 are not allowed to enter.

Large signs are hung around the entrance to the room, declaring the ban and asking for picture IDs, while security guards protect the “Cabinet of Anatomy.” Inside it feels a bit like a love scene being performed in a luxury brothel – the couple is copulating in front of mirrored wall, under a massive chandelier, and, well yes, this plastination, like the others, is detailed and anatomically correct.

On this point, one of the displays walls, all of which seem to be seem to address something between banality and basic knowledge, informs us that the penis is as flexible as a joystick inside a woman – a nugget of information first researched by means of magnetic tomography imaging, and now impressively demonstrated by the creators of Body Worlds.

With so much deliberate provocation, there’s bound to be an audience – and plenty of eager donors for von Hagens’ next show.

The Cycle of Life is open to the public starting Thursday at Berlin’s Postbahnhof – Entrance costs €17.

This article was published with the kind permission of Netzeitung, where it originally appeared in German. Translation by The Local.