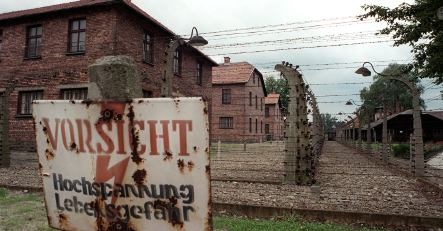 “I can confirm the document’s authenticity,” historian Piotr Setkiewicz, an expert from the Auschwitz-Birkenau museum in Oswiecim, southern Poland, told AFP Tuesday.

Check marks are placed next to the names Gardiner, Dunne, Dunn, Holmes and Clark as well as one of the names which is illegible.

A list of numbers is visible on the top right corner of the same page.

The reverse side of the card bears a list of some 20 German words with their English translations including “jetzt – now, niemals – never, oft – often, seitdem – since then” also handwritten in pencil.

Areas of the card which Synowiec has cleaned of grime appear white.

“I was looking for something else entirely,” Synowiec told AFP Tuesday.

He says he discovered the list of names by chance under debris inside a WWII-era bunker located on the site of the Nazi German Monowitz prisoner of war (POW) camp holding primarily British citizens.

The POW camp in question was located next to the Monowitz slave labour camp, known as Auschwitz III, a branch of the main Auschwitz-Birkenau death camp holding labourers working at the nearby Nazi-run IG Farben rubber factory.

Historian Setkiewicz was able to determine the fate of a man bearing the name Gardiner, believed to be James William Gardiner of Britain’s Royal Artillery, who died in a US bombing raid and is buried in Krakow’s Rakowicki cemetery.

A separate list of seven Auschwitz prisoners surfaced last week after workers found it packed inside a bottle fixed in the mortar of a wall of a building in the southern Polish town of Oswiecim.

Now part of a local high school, the building had served as a warehouse for the camp’s Nazi guards during World War II.

Three of the men on the bottle list are alive, including Frenchman Albert Veissid, now a sprightly 84-year-old contacted by AFP at his home in Allauch in southeastern France and two Poles.

One of the men named on the list has passed away while the fate of the remaining three remains unclear.

Nazi Germany systematically killed more than one million people, mostly European Jews, at the Auschwitz-Birkenau camp located in the then Nazi-occupied southern Polish town of Oswiecim between 1940 and 1945.

The site was part of German dictator Adolf Hitler’s plan of genocide against European Jews, six million of whom perished at the hands of the Nazis during World War II.