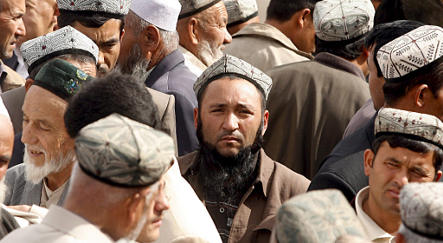 The Obama administration also plans to release some of the Uighurs in the United States, a US official told AFP, although a US senator has vowed to oppose the move.

Attorney General Eric Holder formally asked Germany to take the Uighurs – Muslims from China’s remote northwestern Xinjiang province – during his April 29 visit to Berlin, said a US official speaking on condition of anonymity.

Meanwhile, France has agreed to accept Algerian Lakhdar Boumediene, 43, held at Guantanamo for seven years and cleared of wrongdoing in November, sources told AFP on Tuesday.

President Barack Obama has vowed to shut the notorious “war on terror” jail located at the US naval base in Guantanamo Bay, Cuba, by January 2010.

Many of the inmates have already been cleared for release, but US officials are having difficulty finding countries that will take them in, and meeting resistance to housing them on US soil.

US officials have tried for years to transfer the Uighurs, captured in 2001 in Afghanistan, to a third country, saying they face the risk of persecution if they return to China, as Beijing regards them as “Chinese terrorists.”

The German interior ministry said Sunday it had received a request to take in Guantanamo prisoners, but did not give their identities or their number.

The southern German city of Munich has the largest community of Uighur exiles in the world, with about 500 of the Turkic-origin Muslim peoples living there.

Most of the 17 Uighurs held at the controversial jail were cleared more than four years ago of being “enemy combatants.”

They were living in a self-contained camp in Afghanistan when the US-led bombing campaign began in October 2001 as part of the military campaign in response to the September 11 attacks.

They fled to the mountains, but were turned over to Pakistani authorities, who then handed them over to the United States.

About 240 prisoners still languish in the notorious jail opened after the 9/11 attacks.

Officials in Germany have said a decision about whether or not to take the detainees rests largely with the individual German federal states, which so far have shown little enthusiasm for doing so, out of fear of potential acts of terror.

“We have no interest exposing ourselves to additional risk,” said Holger Hoevelmann, interior minister of Saxony-Anhalt, one of Germany’s 16 states, speaking to the Frankfurter Rundschau daily newspaper.

Meanwhile, Algerian Boumediene could now be transferred “as early as the next ten days,” a source aware of the discussions told AFP, speaking on condition of anonymity. Another US official confirmed France is prepared to accept Boumediene.

Algeria is a former French colony that secured its independence after a 1954-1962 war.

Boumediene has been on hunger strike for the past two years, but rights group Amnesty International said he has been force-fed.

Boumediene was among six Guantanamo inmates arrested in Bosnia in 2001 and initially charged with plotting to attack the US embassy in Sarajevo.

A US judge cleared five of the six for release in November when he ruled that they had been illegally detained.

Three of those men, who held dual Algerian-Bosnian nationalities, were transferred to their adopted homeland Bosnia in December – the first Guantanamo inmates released by the administration of then president George W. Bush under a judge’s orders.

But on Capitol Hill, Republican US Senator Saxby Chambliss said he plans to introduce legislation that would block the release on US soil of any Guantanamo detainee and refuse funding for any such move.

The bill is aimed to reassure the US public that the ex-detainees are “not going to be re-released into their neighborhoods where they’re going to immediately form cells where they will seek to kill and harm Americans,” Chambliss said.

Republicans have accused Obama of committing to closing the Guantanamo prison – seen in much of the world as a symbol of excessive US “war on terrorism” tactics – without first knowing where the detainees would go.

Obama requested $80 million to study where the prisoners might go, or to fund their release, transfer, or prosecution as part of a broader emergency spending request for the wars in Iraq and Afghanistan.