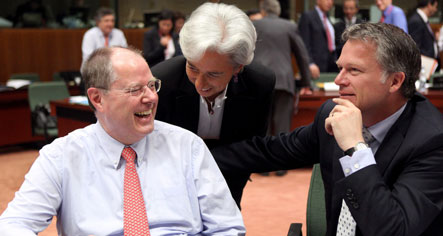 Steinbrück told journalists in Brussels that he regretted that Switzerland, Luxembourg, Liechtenstein and Austria had not bothered to attend an international conference on tax havens in Paris last October.

“Of course, I am going to invite them for a follow-up conference in June in Berlin,” he said, adding ironically: “Luxembourg, Liechtenstein, Switzerland, Austria and Ouagadougou,” the capital of Burkina Faso.

Steinbrück has repeatedly ruffled feathers in Luxembourg, Liechtenstein, Switzerland and Austria as he has spearheaded a campaign along with France to crackdown on countries that do not cooperate with foreign tax authorities.

His drive nearly triggered a major diplomatic standoff with Switzerland earlier this year when he used a Wild West analogy interpreted in the country as likening the Swiss to “Indians.” This led to one Swiss MP saying that Steinbrueck “reminds me of the old generation of Germans, who 60 years ago went through the streets with leather coats, boots and armbands,” a Nazi analogy that caused outrage in Germany.

However, the international push to crack down on perceived tax havens has paid off as the four countries have agreed to cooperate with foreign tax authorities, in effect limiting their banking secrecy rules.

Steinbrück refused to apologise for lobbying for Luxembourg to be included on an international list of tax havens, which left the fellow EU country feeling betrayed by its bigger neighbour.

“We have nothing to excuse,” Steinbrück said. “The German taxman is losing money and honest taxpayers are left looking stupid.”

Czech Finance Minister Miroslav Kalousek, whose country holds the European Union’s rotating presidency, ran to the defence of Luxembourg along with Austria and Belgian, slamming their inclusion on the list under pressure from Germany and France.

“Personally, I don’t think that this list should have been published,” he said, adding that “certain EU countries should not be there” because they had shown a willingness to cooperate on tax fraud.

Austria, Belgium and Luxembourg are the only EU countries that have bank secrecy rules, although they have recently promised to cooperate with foreign tax authorities.