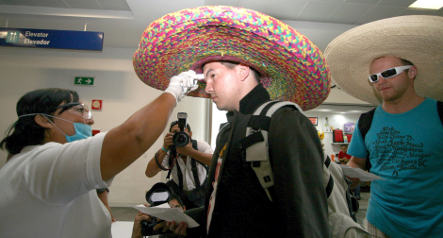 Doctors confirmed the man had the A/H1N1 virus on Monday evening, the Robert Koch Institute in Berlin said. The patient returned from a holiday in Mexico – where the epidemic began – last week.

Despite the latest case of the virus that has caused a global epidemic panic, researchers at the institute spoke of a “certain stabilisation” in the situation.

The man went to a doctor over the weekend with flu symptoms, but was not hospitalised because doctors felt he had a mild case. But health officials in his county investigated the case to hinder any spread of the virus. He is now symptom-free.

The World Health Organisation has reported 1,125 cases of swine flu in 21 countries since the outbreak began in Mexico two weeks ago.

German airline TUI has cancelled all flights to Mexico City until May 31 due to the outbreak, the company said on Tuesday. Customers have been offered a free booking change. The airline will continue to fly to the Cancun, Mexico airport, which is some 1,200 kilometres from the country’s densely populated capital.

The Health Ministry recently ordered a new rule, effective since Sunday, forcing doctors to report all suspected and confirmed cases of swine flu to health authorities after the Robert Koch Institute confirmed the second human-to-human infection in Germany on Saturday.