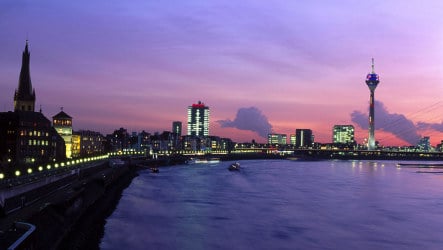 Düsseldorf is apparently the best Germany has to offer. Photo. DPA

European cities dominated the top 10, with Vienna coming out on top as the place with the best quality of living worldwide for those on international assignments. It surpassed this year’s number two Zürich, following what the Mercer report describes as “improvements in Austria’s political and social environment.”

Geneva, Switzerland came in at number three, followed by Vancouver, Canada and Auckland, New Zealand, which both tied for 4th place.

Mercer used what it describes as a point-scoring index, with Vienna scoring 108.6 and Baghdad 14.4. New York was used as the base city and given an index score of 100.

Cities with the best infrastructures were also singled out this year, ranked according to criteria such as electricity supply, water availability, telephone and mail services, public transportation provision, traffic congestion and the range of international flights from local airports.

German cities ranked particularly well in this comparison, commented the Mercer report, with Munich (2) ranked the highest in the region, then Düsseldorf (6) and Frankfurt sharing eighth place with London.

“German city infrastructure is amongst the best in the world, in part due to its first class airport facilities and connections to other international destinations,” commented Slagin Parakatil, senior researcher at Mercer.

“Infrastructure has a significant effect on the quality of living experienced by expatriates. Whilst often taken for granted when functioning to a high standard, a city’s infrastructure can generate severe hardship when it is lacking.”

Mercer’s Quality of Living ranking is based on 39 criteria relating to political, social, economic and environmental conditions. The report aims to “help governments and major companies place employees on international assignments,” according to the company.