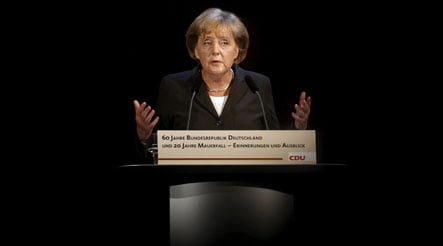 “We would like to thank the peoples of eastern Europe who peacefully liberated themselves from the yoke of Soviet dictatorship and opened the Iron Curtain,” she said.

Merkel, who grew up in communist East Germany, was speaking to her Christian Democratic Union at commemorations marking the Wall’s collapse as well as the 60th anniversary of the founding of democratic West Germany.

“We would like to thank the American pilots and the Polish shipyard workers, just to name two groups,” she said, referring to the US-led Berlin Airlift that kept the city alive during a Soviet blockade 1948-1949 as well as Lech Walesa’s historic anti-communist Solidarity trade union in the 1980s.

“If they had not risked their lives, we would not be gathered here today,” she said.

“We celebrate this historic state of happiness,” noting that Germany was now surrounded on all sides by “free neighbours.”

Germany has planned celebrations throughout the year marking the fall of the despised Wall in a peaceful revolution, culminating on the anniversary, November 9.