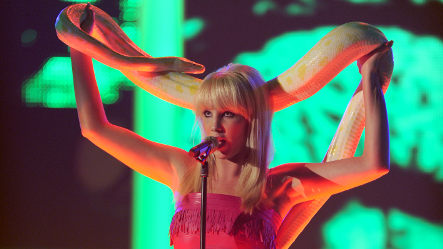 As reported in Monday’s edition of Bild newspaper, RTL admitted that a speaker in the “reminder” trailers following the show had told viewers to vote 03 for Annemarie and 02 for another contestant Daniel, reversing the correct numbers.

After watching the trailers again, Eilfeld said: “It’s an absolute scandal how this vote worked. I want the semi-final to be repeated.”

But RTL is refusing to back down. “There was an announcer error in the reminder trailers after the initial show that we very much regret, but which did not affect the outcome of the vote. After the initial show Annemarie had 19.3 percent of the vote. After the final show she had 19.8 percent and was in third place. The second placed contestant had significantly more.”

But outraged DSDS fans have since flooded the internet with complaints, demanding either a repeat or a three-way final.

One of Eilfeld’s performances in the semi-final, which involved a live yellow snake, did not go down well with the DSDS jury. Aging popstar Dieter Bohlen, who makes a steady living from humiliating teenagers on live TV, described it as a “disaster”.

After the vote, 19-year-old Eilfeld, who has received much support from Bild, said we would continue to pursue her career. “I will make the best of it and work on my dream,” she said.

But her father Mario Eilfeld has shown himself unwilling to move on. “I am a businessman. I know that no notary would certify such a result when such mistakes have been made.” He is reportedly considering taking legal action against RTL.