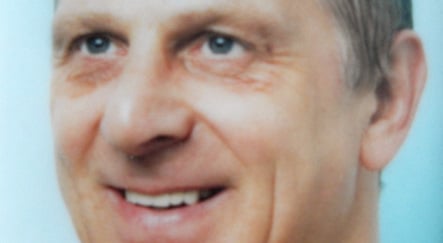 The 56-year-old, who has a price of €100,000 on his head, escaped from prison in 2000, and has a string of convictions, for bank robbery, making bomb threats, kidnapping and various violent crimes.

Police say he has been in prison or on the run for most of his life. He last surfaced at the end of March, when he kidnapped the wife of a Wiesbaden banker and took delivery of €1.8 million ransom money, leaving her tied to a tree.

Since then he has been on the run with a silver VW Golf – which was found on Friday afternoon in a wood near the village of Harpstedt in Lower Saxony.

Police say it seems as if Wolf had been sleeping in the car for a number of nights. But at some point on Friday he left the vehicle in panic after it became stuck in a muddy patch of ground.

He left the car unlocked, with the keys still in the ignition. Some of his personal belongings were left in the car too, including the saddle of a bicycle, a fact that led police to conclude he is probably on the run on the bike.

Police are now trying to work out what made him leave the car and go on the run.

Between his crimes, Wolf leads a normal life, most recently living with a woman in Frankfurt under the pseudonym of David van Dyk.

He is known to have used at least 14 aliases, and have left a trail of crimes in Scotland, England, Holland and across Germany.