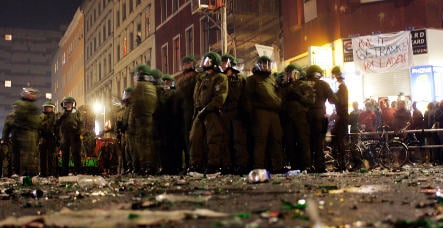 Authorities said on Saturday that the violence was worse than had been seen in recent years, and that some rioters had thrown fireworks and Molotov cocktails at police.

The police used pepper spray and batons against those who ran riot around the Kottbusser Tor area after the ‘Revolutionary May 1’ demonstration with about 4,500 participants ended.

The entire district had been a scene of celebration and partying during the day with live bands on many different stages and tens of thousands of people eating and drinking in the sunshine.

Yet as the last demonstration of the day wound its way through the area, some started throwing stones at the police, who had turned out in large numbers, and things became unpleasant.

Hamburg demonstrations also ended in chaos when a group of around 300 people throwing stones and bottles at the police and setting a car on fire. Police there used a water cannon to drive back the crowd and arrested 23 people.