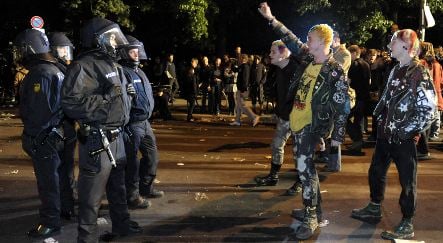 Nearly 50 people were arrested in Berlin while three were held in Hamburg, as tensions grew in many other places ahead of Friday’s many left- and right-wing political demonstrations.

In Berlin, despite the 48 reportedly injured police officers, authorities welcomed the numbers, saying that it was one of the more peaceful pre-May 1 nights.

At least 2,000 police officers had been stationed around areas where younger and anti-authoritarian people usually gather to celebrate the night with music and outdoor drinking.

The Mauerpark in northern Berlin was almost completely surrounded by police, while Boxhagenerplatz in Friedrichshain in the south also attracted the intense attention of the authorities. Bands played at both spots, and around 2,000 people were estimated to have gathered at each.

Later a group of around 200 gathered in the southern district and threw bottles and stones at the police.

Three police officers were hurt in Hamburg, where three people were arrested after a number of confrontations in the Schanzenviertel area following a left-wing march through the St Pauli area.

Friday May 1st is a public holiday and a traditional time for both left- and right-wing political demonstrations, when the two sides often face off to each other, separated by police.

Three neo-Nazi demonstrations are planned for the Rhineland area, with one in Mainz on Friday, others in Kaiserslautern and Neustadt an der Weinstrasse on Saturday.

The neo-Nazi party, the NPD, which organises many of the marches, announced on Friday morning that its planned march in Neubrandenburg in Brandenburg, was cancelled. It only received legal permission to march late on Thursday, but under the condition that drums and burning torches were not used. This was apparently disappointing enough to make them call the whole thing off.

Around 300 people demonstrated on Friday morning in the Köpenick district of Berlin ahead of a planned NPD march later in the day where several hundred neo-Nazis are expected – and more counter-demonstrators.

And in Ulm, in Baden-Wurttemberg, three people were arrested on Friday morning after bottles and stones were thrown from a crowd of up to 150 anti-Nazi demonstrators when three neo-Nazis appeared at the train station.

The biggest fear of violence remains Berlin, where at least 5,000 police are deployed, largely in the Kreuzberg area where an all-day party and music festival usually descends into confrontation and sometimes violence after dark.