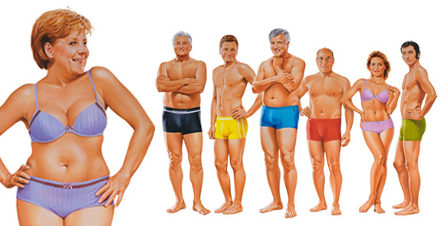 The 100-metre-square mocked-up image of the half-naked world leader is part of a nationwide advertising campaign for an underwear company aiming to cash in on the success of a “cash-for-clunkers” scheme for old cars.

Punters trading in their old underwear will get a €5 discount on a new pair, the advert promises, under the slogan: “The country needs new undies.”

The electronic advert – on a busy road junction in the heart of former West Berlin – caused a stir on the streets and made it onto the front pages of local papers, with scores of people taking snapshots of the billboard with cameras or mobile phones.

“I think it’s great. Brilliant. It’s a positive signal for the economic situation in Germany,” said a 54-year-old who gave his name of Meier adding he would “definitely” trade in his old pants at the first opportunity.

A 37-year-old called Bebe said: “I think it’s fantastic that you can look at something funny when you’re waiting for the bus.”

Merkel herself was tight-lipped on the subject of her image being used in this fashion. “The chancellor’s office does not want to comment on the campaign,” a spokesman said.

The 54-year-old chancellor has often been criticised for her image – as a female leader her hair and choice of clothes was under intense scrutiny after she was elected.

Last year, she made front-pages around the world after showing her cleavage in a low-cut dress to the opening of the Oslo Opera House.

This prompted headlines such as “Merkel’s Weapons of Mass Destruction” from British tabloid the Daily Mail and “Deutschland boober alles” from media gossip website Gawker.

In 2006, another British tabloid, the Sun, published a snatched photographer of her changing into a bathing suit while on holiday in Italy under the headline “Big in the Bum-destag”.

Lined up behind Merkel in the advert are other members of Germany’s political elite, also in their underwear, including Foreign Minister Frank-Walter Steinmeier, who aims to unseat Merkel in upcoming elections.

“I don’t really understand it. I don’t know who they all are. Apart from Merkel, of course,” said a 24-year-old who gave her name as Sonja.

Her comment is perhaps an early indication that it will be Steinmeier, not Merkel, caught with his pants down when Germany goes to the polls on September 27.