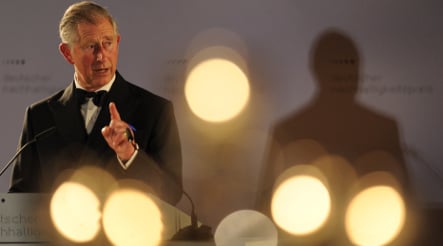 In the German capital for a two-day visit with his wife Camilla, the heir to the British throne received an award for highlighting sustainability issues.

“Climate change is undoubtedly the greatest challenge of our age,” the Prince of Wales said in his acceptance speech. “Therefore, we cannot waste a single moment if we are to bequeath to our children – we all mind about our children and our grandchildren, at least I hope we do – a world fit for them to live in.”

Earlier on Wednesday, Prince Charles and Camilla met German President Horst Köhler at his Bellevue Palace residence before heading to Berlin’s multicultural district Kreuzberg. There the royals watched a football match of teams made of players with different faiths to promote religious tolerance.

On Thursday, Prince Charles and his wife will travel nearby Potsdam, where he will visit one of Germany’s most important climate change research institutes and she will view Sanssouci Palace built for Frederick the Great.

Sadly for royal watchers there will be no handshaking with a rapturous public due to security concerns.