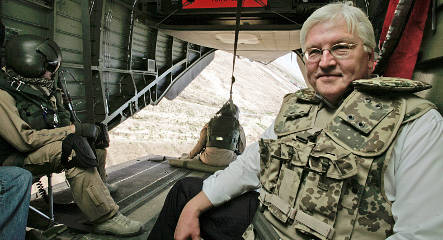 Steinmeier took a military plane to the northern Afghan city of Mazar-i-Sharif to see the soldier after what he called the “cowardly and treacherous attack” on Wednesday night. Germany should not stand for insurgent attacks as it works to build a “better future for these oppressed people.”

One soldier died and four were injured in a firefight near Kunduz on Wednesday that came after a suicide bomber injured four others earlier in the day. The radical Islamist Taliban claimed responsibility for the attacks.

Officials in Berlin plan to reveal more information on the attacks on Thursday afternoon.

Steinmeier’s visit takes place just a few weeks after a conference at The Hague where the international community discussed the state of the country.

Germany has 3,500 troops in Afghanistan operating under the NATO-led International Security Assistance Force (ISAF). The soldiers are based in the relatively peaceful north of Afghanistan.

Last year the German parliament voted to increase to Bundeswehr troop numbers to 4,500, despite the fact that the mission, Germany’s first major overseas military operation since World War II, has been highly unpopular. Thirty-one German troops have died in Afghanistan since 2002.