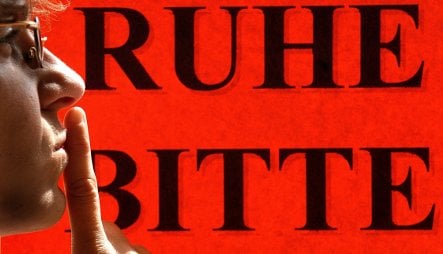 Stress resulting from too much noise is unacceptably high, officials from the agency said to mark the occasion. Some 13 million Germans are burdened by excess noise, it reported, which carry health risks and can lead to sleeping disorders.

The biggest culprit according to surveys: disquiet caused by street traffic.

“Unfortunately for some cities and communities, peace and quiet fall victim to noise all to often,” said agency president Andreas Troge.

But the trouble is by no means limited to German streets, experts say.

The German Association of Acoustics (DEGA) pointed out that better sound in schools could improve learning performance: “The main cause of noise in schools is the fact that lecture halls, detention rooms, gymnasiums and hallways echo and are too large.”

The German Traffic Club (VCD) is also asking the EU to establish a tire marker that would allow consumers to identify quieter tires. The particularly muted “Blue Angel” variety already exist in Germany – but only a few manufacturers currently use the seal.

According to the German Building Industry Association (BG BAU), almost half of all recognised occupational illnesses cite hearing loss as the cause. Alone in 2007, the BG BAU paid more than €19 million for 6,500 workers injured by noise.

“The situation is threatening to come to a head in the coming year,” said a report from the Bavarian Department of Health, which also determined that almost 40 percent of Bavarian youth have less-than-perfect hearing. The report attributes this to the consumption of loud music.

International Noise Awareness Day began in 1996. This will be the fourth time Germany celebrates the day, which is organised by the German Association for Acoustics on various dates in April. Construction, business and recreational noise are the focus in 2009.