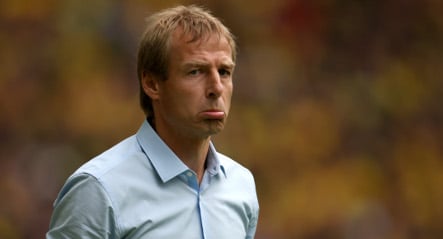 Uli Hoeneß noted that Jürgen Klinsmann had been “surprised” to be sacked. It’s a reaction that testifies to the Swabian’s honest, straightforward character, and at the same time it neatly illustrates one of the reasons for his failure – Klinsmann was a visionary who lacked insight into the necessities of detail and what’s doable.

On his road to “re-establishing Bayern at the top of Europe,” Klinsmann overlooked humble domestic stumbling blocks like Hannover 96, 1. FC Köln and finally Schalke 04. He did not acknowledge these Bundesliga defeats for what they were, but spoke instead of minor setbacks, saying that “we’ll just have to wait” to climb to top the table. But now he will go into Bayern’s history as the manager who never once led the league.

Last summer Bayern meant to start “a new era” with Klinsmann. The 44-year-old was supposed to bring a new spirit to the club’s Säbener Straße headquarters. But by the end it was the Klinsmann-factor that was Bayern’s chief handicap. “We had to remove that psychological barrier that everyone saw in the team on the pitch,” said Bayern chairman Karl-Heinz Rummenigge, explaining the necessity of the split with Klinsmann. “We need a new beginning,” added Hoeneß.

This must wound the ambitious Klinsmann’s pride, who has stood for the reinvigoration of German football since the last World Cup. But the daily grind has disenchanted the fairytale-weaver of the summer of 2006. While the ever-smiling optimist had great intentions, he failed at the smaller tests. In the league, a team lives by its results, not its vision. But even at his dismissal Klinsmann refused to doubt his own efforts. “We’ve laid the foundations for the future,” he said confidently as ever.

But what did Klinsmann mean by this? He could not even begin to justify his cocksure announcement that he would “make every player a little better every day.” In fact, the opposite has happened: Lukas Podolski’s form has disappeared into a deep hole, goalkeeper Michael Rensing has been sidelined, Bastian Schweinsteiger is stagnating and Martin Demichelis, outstanding last season, is way below his best. Even the reliably solid Philipp Lahm is weakening. And there is no evidence of any exceptional fitness so often touted by Klinsmann either.

Nor can he claim to have brought in his much-vaunted system and “new philosophy” to the club. He wanted to overwhelm opponents and win over fans with inspiring offensive football. But following the worst start to a season in 31 years, this ambition was abandoned all too quickly – at the cost of Klinsmann’s authority. Both the Bayern management and the players demanded a tactical re-think.

But for Klinsmann the world still seemed to be in order. After a decent run before the winter break and safe passage to the last 16 of the Champions League, he again started to make lofty statements: “We have no-one to fear. No team in the world.” What followed is now well-known – a humiliating exit from the German Cup competition against Bayer Leverkusen (2-4), a master-class from Wolfsburg in the league (1-5) and a bitter decimation by Barcelona in the Champions League (0-4). “The pride of Bayern has been trampled underfoot,” said a wounded Rummenigge.

So what is left of Klinsmann’s legacy at Bayern? Perhaps he meant it literally when he spoke of a “foundation for the future,” since the new and obscenely expensive elite training centre will always be associated with his name. But it does not seem to have made a single member of Bayern’s team a better player. Yet the monumental modernity of this complex is perhaps a perfect image of Klinsmann’s short reign in Munich. He failed miserably at his first attempt to be a club manger because of his own grand schemes.

This editorial originally appeared in the online newspaper Netzeitung. Translation by The Local.